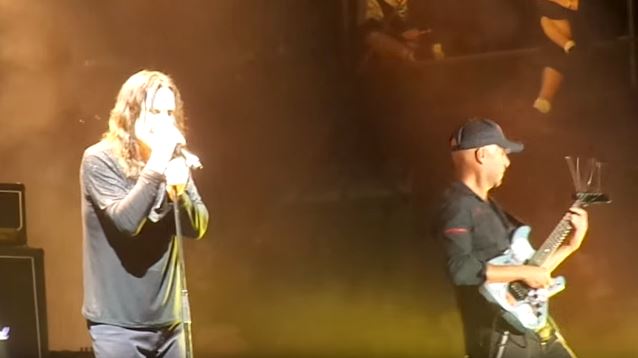 Ozzy Osbourne played his first solo show in some time on Halloween (Saturday, October 31) at the Voodoo Music + Arts Experience in New Orleans. Joining Ozzy for the 90-minute set as guests were Slash, RAGE AGAINST THE MACHINE guitarist Tom Morello and Ozzy's BLACK SABBATH bandmate Geezer Butler on bass.

According to NOLA.com, "Morello had applied the words 'OZZY RULES' to the back of his instrument, so that when he raised the guitar body to eye level and apparently plucked the strings with his teeth, the audience was treated to an unexpected Ozzy tribute."

Check out fan-filme video footage below.

A review of the concert and photos can be found at NOLA.com.

A few days before the gig, Ozzy gave The Pulse Of Radio a rundown on the lineup. "I haven't played with Tom Morello but I've met him a couple of times and he seems a nice enough guy and I've heard nothing but great things about him," he said. "I'm looking forward to seeing him. And Geezer and Slash — we all know Slash. Slash is an entity on his own, you know. He's a great friend of mine as well. And Geezer Butler, I've known him since we were about 12."

Tom Morello said in an interview with Maxim that the chance to play with Ozzy is "a thrill," adding, "My first-born son Rhoads Morello is named after the great [late Ozzy guitarist] Randy Rhoads… So being able to play with Ozzy on some of Randy's songs is another check off the bucket list."

Ozzy will rejoin SABBATH in early 2016 for what is being dubbed as that band's farewell tour, which kicks off on on January 20 in Omaha, Nebraska. A second leg of North American dates commencing on August 17 in Wantagh, New York was unveiled last week.