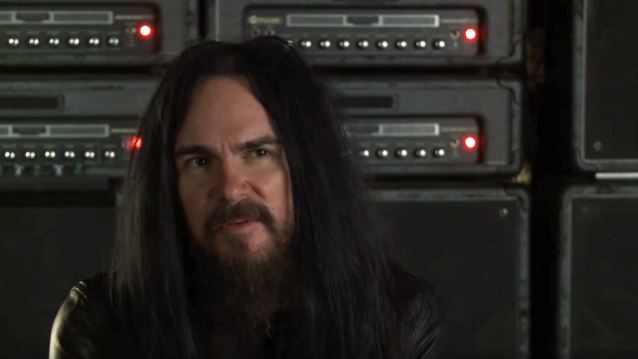 During a brand new interview with the "Talking Metal" podcast, OZZY OSBOURNE bassist Rob "Blasko" Nicholson spoke about the possibility of a new solo album from the BLACK SABBATH singer once the legendary heavy metal band has completed its "The End" tour in early 2017. Asked if he has any insight on the long-awaited follow-up to 2010's "Scream", Blasko said: "Nothing other than what [Ozzy has] already said in the press. So he seems to be hinting at his continued enthusiasm to want to do that. 'Cause he's, like, 'Well, SABBATH's stopping, but I'm not stopping.' So we'll see. But I anticipate that something will start to brew when he's, sort of, kind of come down and had some time to acclimate at being at home for a minute, and then he'll probably wanna go back in and start to whip up some songs and see where that goes."

Ozzy told Metro back in August that he was "playing around with some song ideas" for his next solo album. He added: "Once BLACK SABBATH is off the road, I will be heading into the studio with my band to get the songs recorded. Once it's all in the can, you can be sure to see me back on the road again."

Ozzy's wife and manager Sharon Osbourne recently told Rolling Stone that the 67-year-old singer will carry on as a solo artist after BLACK SABBATH's farewell tour comes to an end. "We'll continue until Ozzy finishes, and Ozzy won't be long behind them when he calls it a day," she said.

Ozzy told Billboard that he is not planning on hanging it up once SABBATH has retired from touring. "I just get on with it," he said. "I'm not stopping, Terry [BLACK SABBATH bassist Geezer Butler] is not stopping; we're just stopping SABBATH. We're not gonna sit in our rocking chairs and look at our scrapbook. We'll still be involved in the music scene; that's what we’ve always done. It's been the best thing that ever happened to me."

Ozzy has not released an all-new solo album since "Scream", having spent the last few years touring with BLACK SABBATH and recording that band's "13" album.

Epic Records president Sylvia Rhone told Billboard in August 2015 that Osbourne was working on a "really special album." She added, "It's going to be amazing. It's something Ozzy has never done before that he's always wanted to do."

Listen to "TM 629 Kyng and Zakk Sabbath" on Spreaker.