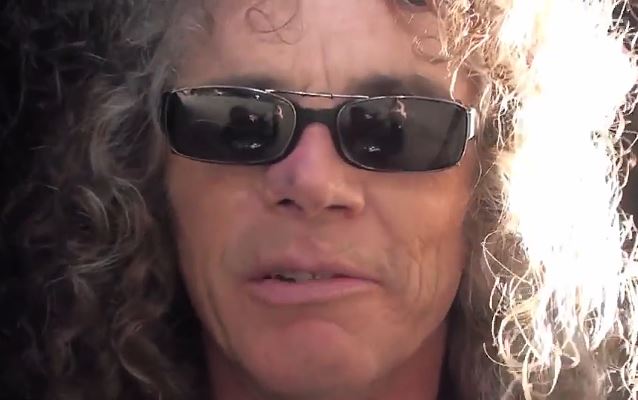 In a brand new interview with Songfacts, vocalist Bobby "Blitz" Ellsworth of New Jersey thrash metal veterans OVERKILL was asked if he ever had any vocal problems over the years, and how he keeps his voice in shape.

"I did," he responded. "Early on, I started developing what's called polyps, which are kind of warts or nodes. I started getting it on my vocal cords. And it's really just from singing incorrectly. I mean, I really didn't know how to sing, even though my mother sang and it's always been something in our family; I just didn't know how. I'd come home from tours and couldn't talk for two months, which is kind of unusual for a young guy. More common for an older guy."

Blitz added: "To this day, I still use those principles and I warm up for a minimum of a half hour before a show, and then I kind of cool down for another half hour. So an hour before the show I'm doing something, singing somewhere in the bus or a dressing room. The same stuff I had learned all the way back in the '80s."

Ellsworth also talked about the songwriting process in OVERKILL, telling Songfacts: "Well, it almost always starts with a riff. And when it comes to the riff, I know my partner, D.D. Verni [bass], he's the riff master for OVERKILL. People will say, 'OVERKILL's identifiably based on Bobby's voice.' Well, I can pick a D.D. Verni riff out of 100 other riffs. That's the way I think about it."

He continued: "So it starts with that riff. And I think one of the cool things — and I'll apply this next part of the answer to [OVERKILL's latest album] 'White Devil Armory' — we always look for a thread, and the thread for this record was 'Armory'. D.D. was sending me pictures, he was verbalizing it, he was saying, 'I'm obsessed with this word, I don't know why I love it. It's ominous, it's big, it's dark, I'm getting this great imagery.'"

Blitz added: "So that thread that he's using to write riffs in this case is 'Armory', and I start messing with it. Now, after experimentation, it came out to 'White Devil Armory'. But that's what he was thinking of."