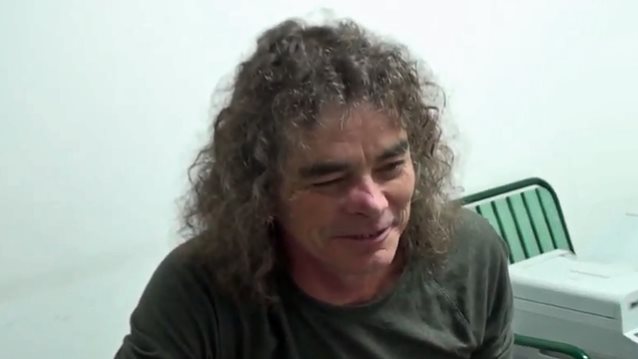 Croatian metal portal NoiseEyes.com conducted an interview with OVERKILL frontman Bobby "Blitz" Ellsworth before the band's November 18, 2016 show at Szene in Vienna, Austria. You can watch the full chat below. A few excerpts follow (transcribed by BLABBERMOUTH.NET).

On why the release of OVERKILL's new album, "The Grinding Wheel", was pushed back to February 2017:

Bobby: "It was simplicity. It was a matter of internal mix-ups. We thought we had the entire month of August to mix, when we really had none of the month of August to mix. When Nuclear Blast [OVERKILL's record label] called us, and said, 'Where's the music?' We said, 'Fifteen more days.' We were really close with the mix, but this was our first time working with [producer/mixer] Andy Sneap and he told us, 'Hey, man, it's close, it's 90 percent, but let's do another twelve days when I get back from a business trip. D.D. [Verni, bass], Dave [Linsk, guitars] and I discussed it, and asked: Do you take the great product? Or do you take the money? That's the way we thought about it. We took the dignity over the money with regard to pushing the release back. I always think of every record as your best opportunity to prove yourselves. If you go out pushing that record out, thinking it's 90 percent, then it fucking is 90 percent. It was a real simple mix-up with regard to time. We blame ourselves for 50 percent and Nuclear for the other 50 percent. No, 51 percent for them, 49 percent for us. [Laughs]"

On the musical direction of the new album:

Bobby: "First and foremost, production. Andy has done some great work with different bands in the genre from ACCEPT to ARCH ENEMY. He's really the metal go-to guy. But we wanted to use his abilities, but we wanted to use them with regard to how we saw the record being. One of the things we saw in modern metal is a guitar tone that doesn't have a cohesive relationship with the drums. We wanted more organic drums to start with, and we wanted a guitar tone that came somewhere out of the high technology of the '90s. So it's really kind of a throwback with regard to our thinking, so if you're thinking a drum sounding like a drum and the guitars sounding more in the vein of 'Horrorscope' for us, where it wasn't just top end, but top end and low end with a little bit of mids carved out of them. I think that's the thing I noticed the most about it.

"With regard to songwriting, we had done three records, 'Ironbound', 'The Electric Age' and 'White Devil Armory', that were for us, the Father, Son, and Holy Ghost. [Laughs] Or sisters! There's something about them where there was a formula that we were, I think in our opinion, neglecting some of the other tools that we've accumulated over the years. 'The Grinding Wheel' is much more diverse. There's an epic feel to some of the songs. There's a sludgy, slower feel. There is 'Our Finest Hour', which has been released, which could fit on one of those other three records but everything else doesn't seem like it would fit on these records. I think it's a wider OVERKILL, but press play when you get it. I think that's the best way for people to decide. Everybody has got to be a critic. That's the idea of being a music fan. I'm a music fan, but I'm also a critic. I love or I hate, or it's okay. It'd rather be loved or hated, not 'Ah, it's okay, whatever.'"

On playing "Feel The Fire" and "Horrorscope" in full on April 16 at Turbinenhalle 2 in Oberhausen, Germany:

Bobby: "The idea behind it hatched on a festival a year prior. We were in Belgium at Alcatraz [festival] and the Nuclear guys were there, and I remember the Nuclear guys coming in through the dressing room going, 'Hey, you know you still owe us a DVD.' We were like 'Mmmmm…' [Laughs] So D.D. and I spoke about it and involved the other guys down the road a little bit. The idea was more to show the beginning of OVERKILL and then show the 25 years of 'Horrorscope'. But I think it shows when D.D. and myself became the key songwriters in the band. That's when we started doing it together as opposed to doing it collectively with prior members. I thought it was really a good thing. I think there was great chaos, unbridled chaos on the 'Feel The Fire' record, but by 'Horrorscope', we understood what the chaos meant. That's why there's something a little more deadly about knowing when to pull the trigger as opposed to pulling it all the time. I think when the idea was hatched, other bands had done such things, we said, 'The only way to do it is to double it, to do it in twos.' We did warm-up shows for it and ended in Oberhausen, which we now affectionately call 'Overhausen' in Germany. [Laughs] We sold the place out and are working for 2017, but the priority was 'The Grinding Wheel'. We thought it was a great opportunity, so we kept it in the can."

On why OVERKILL has dropped songs from albums like "I Hear Black" and "Killbox 13" from their live set:

Bobby: "I don't think they've necessarily jumped from the setlist because of our dislike of them. Recently, we released a boxset called 'Historikill' which holds a bunch of that era, but I think it's an underappreciated era of metal. There was obviously bands doing stuff and 'Historikill' proves that. The reason is because we have a philosophy of hit 'em hard and hit 'em fast, then leave 'em hard and leave 'em fast approach. If you fill it up and you get rid of all the classic songs or classics that we consider classic, then get rid of the new songs, then you can play all of the fucking middle shit you want. If you keep the classics in or the most popular songs, then versus the new songs to balance it out, then we're already at our 90 minutes. There's no possible way to do both things."

"The Grinding Wheel" will be released on February 19, 2017 via Nuclear Blast.

OVERKILL and NILE will join forces for a U.S. tour in February/March 2017.