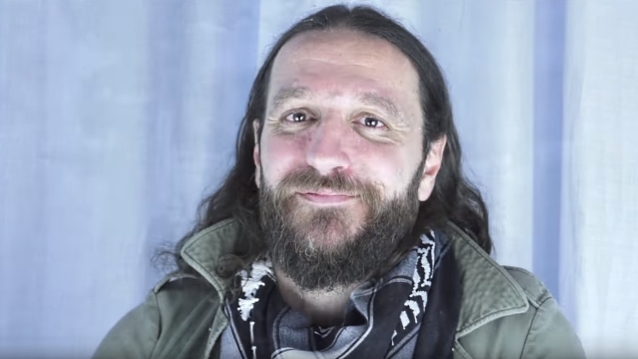 Kobi Farhi, the vocalist of the Israeli metal band ORPHANED LAND, has spoken out against a growing international movement that targets his home country.

A number of artists, including Roger Waters, have been vocal in their support of the Boycott, Divestment and Sanctions (BDS) campaign, which calls for economic pressure on Israel to end the occupation of Palestinian land, grant Arab citizens equal rights and recognize the right of return to Palestinian refugees. It has called on artists, music fans and broadcasters to boycott this weekend's Eurovision Song Contest in Tel Aviv, arguing it amounts to "whitewashing" Israel's policies towards Palestinians in the occupied West Bank and the Gaza Strip.

Asked by Independent for his view on the Israel boycott by certain artists, Farhi said: "The 13 years of the BDS movement hasn't changed anything, if you look at the bottom line. It has also been a great excuse for anti-Semites to jump on board. I can't see how Israel is so different from many other countries that it deserves to be singled out, and anyway, we have literally proven that our approach works better.

"I'm very disappointed with artists who walk that road of exclusion," he continued. "We all know human rights is not the best issue, both in Arab countries and the Middle East, but what would anyone gain if I boycott all Arabs instead of writing our albums and reaching more people that I'd otherwise not connect with?"

Last year, Kobi told NewStatesmanAmerica that he was opposed to BDS. "You don't boycott art," he said. "Music can change the world. Think of Bob Dylan's 'Masters Of War'. What would have happened if you boycotted it? Saudi Arabia and Iran have terrible governments, but I would play there if I could."

ORPHANED LAND's music draws from Eastern, Western and Asian influences, and the band is known for its message of peace and unity among Jews, Arabs and Christians. The group's songs are written in Hebrew and English.

ORPHANED LAND opened for METALLICA in 2010 in Israel and toured Europe with Palestinian rock group KHALAS in 2013.