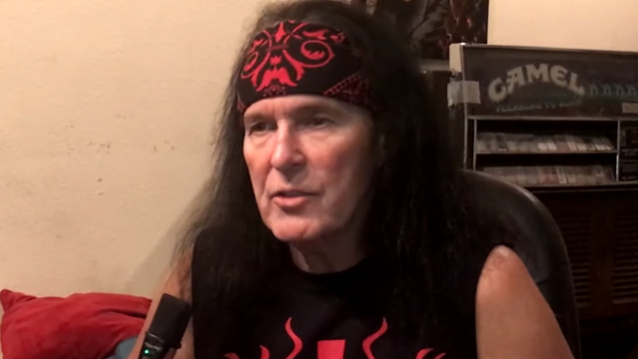 Original AC/DC singer Dave Evans says that he would consider writing a book about his time with the band if the "right publisher" approached him with an offer.

Dave recorded AC/DC's first two singles, "Can I Sit Next To You Girl" and "Baby Please Don't Go". But in October 1974, less than a year after AC/DC's first gig, Evans was out of the band.

"A lot of people want the book," Evans told former ANTHRAX singer Neil Turbin for The Metal Voice prior to his August 15 concert at the Whisky A Go Go in West Hollywood, California. "That first 12 months of the band was incredible. So much happened in that 12 months. And I know a lot of fans want me to write a book about what happened, 'cause I'm the only one who can write it.

"If the right publisher approached me and wanted to give me an advance, I would write the story, and the fans would absolutely love that story," Dave continued. "It's a story that's never been told. And a lot of people should be mentioned, actually, in that first 12 months — a lot of important people. It's a great story. I'm part of that story."

Earlier this year, Dave told Wales Online that "a lot happened' during his time with AC/DC. "We had our first record, our first gigs, our first tour, three bass players, we played some of the biggest venues in Australia. It was an amazing time.

"We were always very ambitious. When you're young, you want to show the world what you've got. We were doing shows, but, basically, we weren't getting paid. The management had money but we were basically starving, so one night we'd had a few drinks and I said my piece and it all kicked off.

"I said, 'That's it, I quit.' I finished the rest of the tour and then we had a meeting where it was decided that I was out. I said 'fine' and that was that. I was no longer in AC/DC."

Evans said he "never had a problem with Bon," adding, "He had an opportunity to take my place and become the singer for AC/DC. I would have done the same thing. Bon was a rock and roller and as hard as me... He was quite a few years older than me but we grew up tough and did the hard knocks."

Evans told Wales Online that his former bandmates have not acknowledged his role in AC/DC's early history, saying, "They like to pretend in interviews that Bon Scott was there from the very beginning. The truth of the matter is that a lot went on before Bon became involved — in fact, the band had already got through two bass players, three drummers and a handful of managers by that point... all the stuff [Bon would] later do onstage with AC/DC, like taking off his shirt and carrying Angus around on his shoulders, was nicked off me."