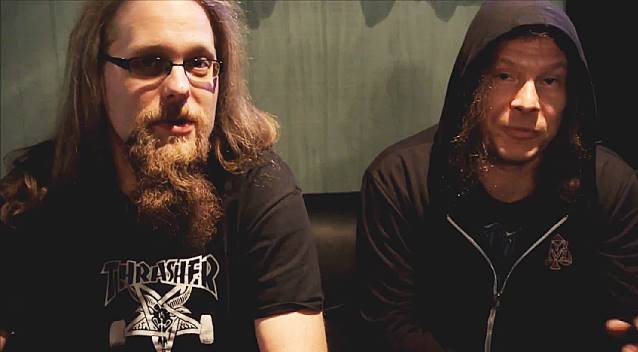 Metal Thoughts conducted an interview with vocalist Jukka Pelkonen and keyboardist Aapo Koivisto of Finnish melodic death metallers OMNIUM GATHERUM on February 25 at the Dallas, Texas stop of their North American tour with DARK TRANQUILLITY. You can now watch the chat below.

OMNIUM GATHERUM's latest album, "Beyond", was released on February 25, 2013 in Europe and March 5, 2013 in North America via Lifeforce Records. The CD was recorded by Teemu Aalto and mixed and mastered once again by Dan Swanö. The artwork for the follow-up to 2011's "New World Shadows" was created by Olli Lappalainen.

Regarding the musical direction of "Beyond", OMNIUM GATHERUM guitarist Markus Vanhala previously stated: "'Beyond' is really going beyond all limits of melodic death metal from the winter wonderland! The album follows the good known path of 'New World Shadows' and 'The Redshift', but adds a lot of new flavors and spices to the good ol' melting pot to lift the band to a new heights. It's our most melodic and versatile album so far, but at the same time, it still holds for example the most brutal death metal growls in our career yet as also some really tasteful clean vocals between the lines. I'm sure everyone who gives the album many spins can find something new with every turn, so this should be a album that hold up the sands of time and rewards the listeners who are digging deeper and searching something more than just a one-hit wonder of the day!"