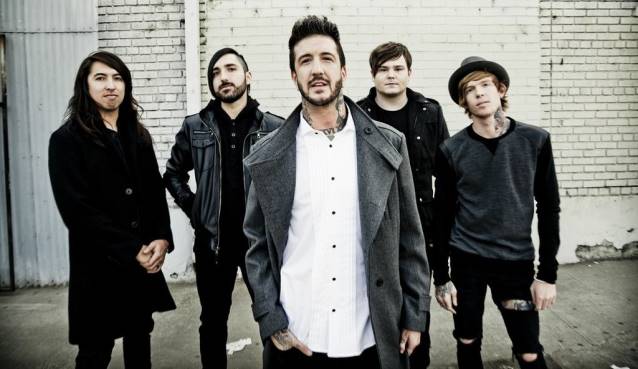 The official lyric video for the song "You're Not Alone" from the California-based rock quintet OF MICE & MEN can be seen below. The track is taken from the band's third studio album, "Restoring Force", which will be released on January 28, 2014 via Rise Records. The follow-up to the band's 2011's "The Flood" was recorded at House Of Loud in New Jersey and was produced by David Bendeth (PARAMORE, PAPA ROACH, A DAY TO REMEMBER, BREAKING BENJAMIN).

"What happens after a disaster? What happens after 'The Flood'?" asks the band's frontman Austin Carlile. "You return to normal. You find balance again. That's what we felt like we were doing with this album. We wanted this record to bring equilibrium back to our band and music. We're letting everyone know that we're here to stay. We're 'Restoring Force'."

OF MICE & MEN recently announced that they will join BRING ME THE HORIZON for "The American Dream Tour" — an extensive run of North American dates that will kick off on February 3 in Orlando, Florida. Tickets for the tour are on sale now.

"The Flood" was originally released on June 14, 2011 and received a re-release on July 24, 2012 and included four new tracks. "The Flood" debuted at No. 28 on The Billboard 200 chart and was hailed by the New York Times as "one of the year's most bruising rock debuts." Alternative Press called the album a "genuine statement of artistic purpose." Rock Sound declared the release "a truly memorable, hip-shaking face-breaker of epic proportions." To this date, "The Flood" has sold over 125,000 copies and has been streamed nearly 16,000,000 times on YouTube, making it one of the most successful releases in Rise Records' 22 years of operation. The band has brought their memorable live show to audiences around the world having sold out multiple headlining tours domestically and internationally.