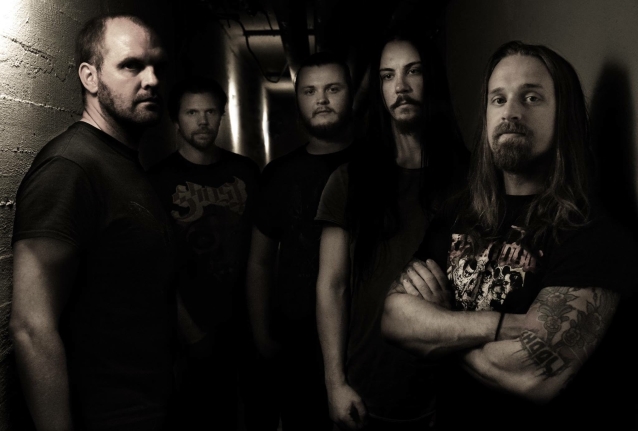 OCTOBER TIDE, the long-running Swedish doom five-piece featuring former KATATONIA members Fredrik and Mattias Norrman, will enter the studio at the end of November to begin recording its sixth album. The follow-up to 2016's "Winged Waltz" will be mixed and mastered by Karl Daniel Liden (BLOODBATH, KATATONIA, CULT OF LUNA) in January for a spring 2019 release via Agonia Records.

Fredrik Norrman comments: "We haven't made much noise about this so far, but we have written a bunch of songs lately. In fact, we have almost a whole album more or less finished."

OCTOBER TIDE's last live appearance took place in Dubai, United Arab Emirates on October 26. Shortly before the recording sessions, the band will travel south to Bucharest, Romania, where they'll perform at the Metal Gates festival with ROTTING CHRIST, SHINING and DRACONIAN. While recording the album, they will play a show at December Doom festival in Vantaa, Finland, with plans to do a special setlist from its debut release, "Rain Without End".

Formed in 1995 by KATATONIA members Jonas Renkse and Fredrik Norrman, OCTOBER TIDE spawned two, now-cult releases, "Rain Without End" (1997) and "Grey Dawn" (1999), before going on hiatus for over eleven years. Reunited in 2009, the Swedes released three more studio albums — "A Thin Shell" (2010), "Tunnel Of No Light" (2013) and "Winged Waltz" (2016) — all of which featured exceptional guitar work, on top of the band's emotional touch on death metal.