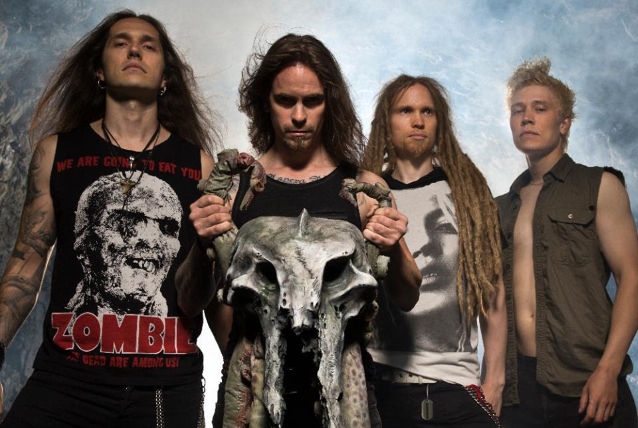 Helsinki-based heavy metal quartet OCEANHOARSE has regretfully announced that Tommy Tuovinen will not be able to continue as the singer of the band due to hearing loss.

"I got my ears checked recently, and the results showed dramatic decrease in hearing," Tuovinen says. "I was basically told by the doctor that I couldn't keep exposing myself to the kind of volume that being in an active band requires — especially one such as OCEANHOARSE that is working five days a week and plans on touring for months on end for years to come. This is shattering news, but I must take it seriously. I will probably do occasional studio work and maybe some one-off shows here and there in the future, but unfortunately it looks like my active career in music is done."

"We were all shocked when Tommy told us the news," guitarist Ben Varon says. "We had just gotten off to such a great start with each single doing better than the last one; we had songs on Wreckfest game soundtrack, great shows opening for big bands, festival slots... Not to mention negotiations with record labels and plans for our first bit of touring abroad, all of which will now be put on hold. It's back to square one for us, basically.

"But all that aside, the worst part is of course that Tommy has to involuntarily step down from doing the one thing he loves. In losing Tommy's amazing voice and charisma, we're losing one fourth of what makes OCEANHOARSE what it is. Still, health comes first, and we know that there is no other option but to start thinking about a future without him in the band."

"OCEANHOARSE is thus announcing a search for a new singer! If you can sing, know how to work a crowd, prioritize music over everything else and are willing to give 120 percent of yourself to this band, you might be the one we're looking for," says bassist Jyri Helko.

Drummer Oskari continues: "We're not looking for a Tommy clone: you don't need to sound like him to land the job. What we're looking for first and foremost is character: a strong frontman (or frontwoman) with their own identity, someone who'll bring their own flavor to the band. So if you think you have what it takes to sing in a highly driven, hard-working band with its sights on world domination, don't hesitate to contact us. Drop us an email to and we'll get back to you. The journey is only about to begin!"

After two years of working in the shadows, OCEANHOARSE, which consists of familiar faces from the Finnish metal scene, released its debut single and video, "The Oceanhoarse", in January. It was followed by two sold-out shows in Finland supporting BEAST IN BLACK.

It was a conscious decision to hold up the launch until the band was extremely tight, the song material strong enough, and the band's own unique voice beginning to take shape. Good songs were canned along the way, if the group felt they didn't fit or weren't original enough.

Early on, the members of OCEANHOARSE also set some ground rules for themselves: There would be zero use of backing tracks or synthesizers. The focus would be on kick-ass, live-oriented heavy metal. The band would also have to be number one priority to all of its members, no exceptions.