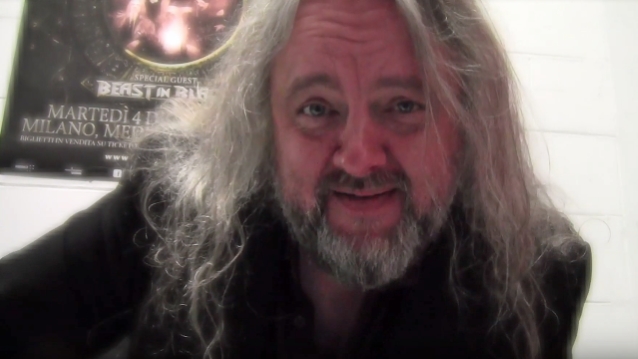 Linea Rock 's Barbara Caserta conducted an interview with NIGHTWISH multi-instrumentalist Troy Donockley prior to the band's December 4 concert at Mediolanum Forum in Milan, Italy. You can watch the entire chat below. A few excerpts follow (transcribed by BLABBERMOUTH.NET).

On how his musical capabilities has shaped NIGHTWISH's overall sound:

Troy: "That's difficult to pinpoint any one or even two things. I think it's just an atmosphere, a new atmosphere that was brought into the band with the instruments that I brought in. Yeah, the atmosphere, obviously, the folk-y element to the pipes and the whistles and the bouzoukis and things like that. The sound is expanding all the time. The most exciting thing for me, the most exciting development over the last five years, is being able to harness more instruments into the band, bringing more of the multi-instrumental approach."

On how his life changed upon originally joining NIGHTWISH as a live member in 2007:

Troy: "Yeah, absolutely it has. It took me on a whole different road. It's a road I didn't expect. I didn't see it coming at all. But what it really did was broaden my horizons as well. Although I come from a rock background, mainly progressive rock and traditional music, I never really moved into the metal scene, even though I grew up around it. I was into [LED] ZEPPELIN and all that kind of stuff when I was a kid, but as far as metal goes and symphonic metal, I was a complete novice. I had no experience at all. That was fairly mind-blowing to dive into this whole genre as a beginner. But, now, of course, I'm a seasoned veteran. [Laughs]"

On working with NIGHTWISH primary songwriter Tuomas Holopainen and whether he's currently working on any ideas of his own:

Troy: "I suppose what I brought into the band is a new perspective, especially on concepts. With the last album, 'Endless Forms Most Beautiful', I was involved conceptually, much deeper than I was before, so that was really nice and musically, as well. My contributions were more tuned into the concept. I've always felt like that as well about music. That's probably my progressive rock background as well, concept albums and all of that. But for me personally, because I am a composer, really — that's what I'd call myself, rather than a musician — that's where I get the most satisfaction and happiness is writing music. But, in tandem to NIGHTWISH, I've also got this other project called AURI, which I'm doing with Tuomas and Johanna Kurkela. We did an album this year, which we put out. I'm working on that. Tuomas is working on music for NIGHTWISH at the moment; I'm working on music for AURI at the moment. We've got those two things going at the moment. That keeps me creatively quite satisfied."

On whether he regrets not being able to work with original NIGHTWISH singer Tarja Turunen, who was dismissed from the band in 2005:

Troy: "No, not at all. Again, you've touched on a unique situation for me, that it did give me a different overview of what NIGHTWISH was. Before the album 'Once', I had no idea who they were. I had never heard them. I never heard any stuff before 'Once'. And so, after 'Once', Anette [Olzon] arrived [in 2007]. Plus, I liked Anette's voice. I thought Annette was a really great singer. Tarja, her voice didn't really do it for me. I wasn't a fan of Tarja's voice… I arrived at the right time for Anette, but, of course, then the stars aligned and the greatest possible event happened when Floor [Jansen] arrived. And Floor has it all — she has it all. And she's so wonderful to be around. She's just lovely. And she's a powerhouse. She can sing anything. So we're really, really in a wonderful place at the moment. The band is really solid and very stable, which, in the past, it wasn't. There were quite a few close shaves with implosion. But things are good [now]. [Laughs]"

NIGHTWISH's next studio album, which is tentatively due in 2020, will mark the band's second full-length release with Jansen, who has been touring with the group for the past seven years.

Holopainen recently stated that "all the songs" for the follow-up to "Endless Forms Most Beautiful" have been written.

The band has spent the last few months on the road in support of its recently released "Decades" compilation.