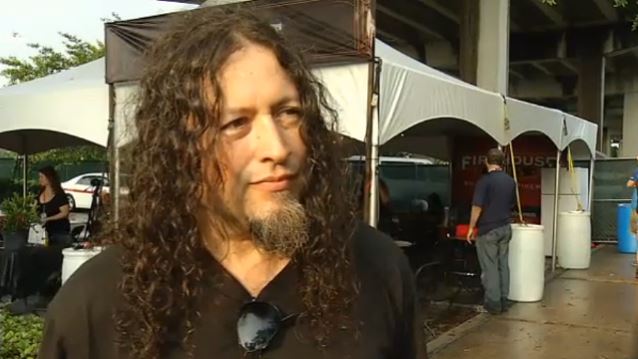 4Chords reporter Jennifer Kessinger conducted an interview with QUEENSRŸCHE guitarist Michael Wilton at the Welcome To Rockville festival on April 25 in Jacksonville, Florida. You can now watch the chat below.

"With the new lineup, it's really been great," he said. "It's been a rebuilding process. We've been doing big shows like this where we see a lot of people that haven't seen us since, like, the late '80 [or] early '90s. They come up to me and say, 'Michael, my God! I love the new QUEENSRŸCHE. Thank you for saving my band.' That kind of thing. And it's really a great thing to see so much support and so much, really, just heartfelt belief in the music and the band. And things have just… The doors have just opened for us, and we're getting all these offers, and everything is going great."

"Queensrÿche" sold around 13,500 copies in the United States in its first week of release to land at position No. 23 on The Billboard 200 chart. The record arrived in stores on June 25, 2013 via Century Media Records.