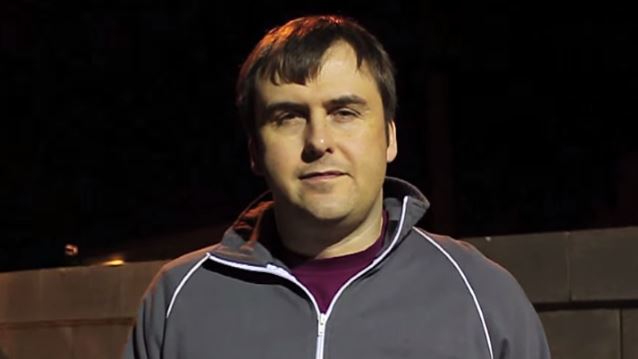 Rustyn Rose of Metalholic.com recently conducted an interview with vocalist Mark "Barney" Greenway of British/American grindcore pioneers NAPALM DEATH. You can now listen to the chat in the YouTube clip below.

Asked how NAPALM DEATH has managed to continue evolving while remaining true to the band's signature sound, Greenway responded: "Ah, to be honest, it's just a natural thing. It's like riding a bike; once you do it, you tend not to forget.

"I think it wouldn't be too pretentious to say that there is a real chemistry between us, as the four people. We understand each other's techniques, each other's approach, much of which is just very spontaneous and very natural. And we just seem to be able to glue it all together, and it just works that way."

He continued: "While we've been with Century Media, I think, arguably, it's been our most productive period in terms of the quality of the stuff, for many years, within the period before that. So it's something. I guess we're on a bit of a roll.

"Of course, we have those worries when we go into a session. We're always kind of thinking, 'Well, is this stuff good enough? Are people gonna like it?' You try not to have those feelings. You try not to analyze things that closely. But you just do. In the back of your mind, you're just worried slightly about whether it's gonna have the same impact as your previous album. But it always seems to work out in the end."

NAPALM DEATH will release its 15th studio album, "Apex Predator - Easy Meat", on January 27 (one day earlier internationally) via Century Media Records. The CD's striking artwork, which can be seen below, was created by Danish designer Frode Sylthe (Friktion.com), who has previously worked on the band's "Utilitarian" album as well as with such other acts as AT THE GATES, TOTALT JÄVLA MÖRKER, THE HAUNTED and BURST.