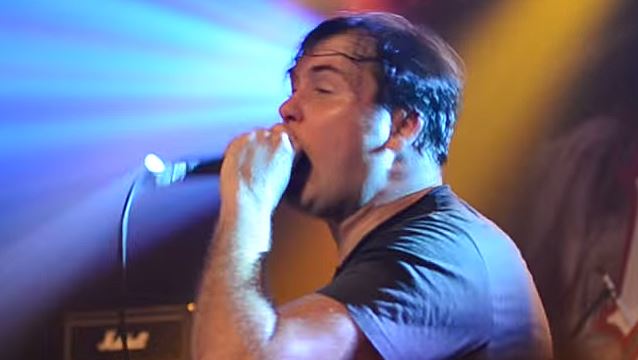 Vocalist Mark "Barney" Greenway of British/American grindcore pioneers NAPALM DEATH was interviewed on the December 19-21 edition of Full Metal Jackie's nationally syndicated radio show. You can now listen to the chat using the Podbean widget below.

On whether he thinks it's important for metal to be a platform to bring attention to topical social issues, such as slave labor, which inspired NAPALM DEATH's new album, "Apex Predator - Easy Meat":

Barney: "I don't it's necessary that metal should be a platform. It's just that, as a human being myself, and someone who believes in human dignity and equitable way forward, then I think it's just a good thing to be able to do for me. I put the ideas on the table, and I sort of say to people, 'well, there it is. Maybe this is something that you haven't thought about before. So check it out. See what you're thinking.' A lot of people do say, 'Oh, I never knew about this stuff.' And I've been following it for some years, so there you go. So it does work.

"Although I have quite strong views about stuff, I try not to hit people with the proverbial big stick, because, I think, you have to let them find their own way within certain things, because if you try and bully them into it, I think it psychologically turns people's heads the other way. So I try and do it in a certain way.

Barney: "I think you can trace a line back to the very first album, actually, back to 'Scum' — between 'Scum' and the new one, 'Apex Predator - Easy Meat'. And I think that's somewhat of an achievement, because we tend to think of bands' first, or second, or maybe their third album as the period when they're really fired up and they sound quite exciting. But I think we've managed to make that fairly consistent, at least I feel that we have. And I just think that the new one is just a culmination of several years of quite a nice mix of really traditional NAPALM full brutal attack and then also this quite ambient, unsettling, queasy-sounding dissonance. And mixing the two together in certain ways, I think, it seems to be working really well for us. I think the songs are quite quirky in some ways, but I think quite memorable, and always extreme. And I think they really carry a lot of weight."

NAPALM DEATH will release its 15th studio album, "Apex Predator - Easy Meat", on January 27 (one day earlier internationally) via Century Media Records. The CD's striking artwork, which can be seen below, was created by Danish designer Frode Sylthe (Friktion.com), who has previously worked on the band's "Utilitarian" album as well as with such other acts as AT THE GATES, TOTALT JÄVLA MÖRKER, THE HAUNTED and BURST.