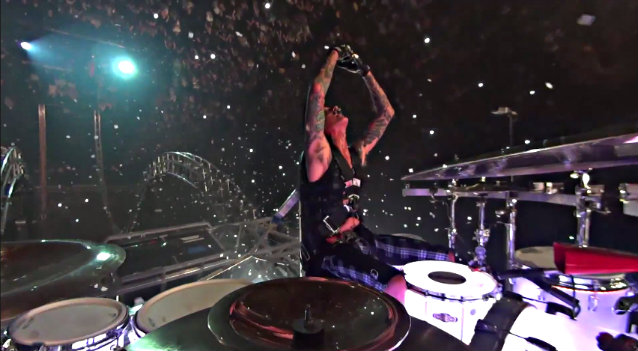 MÖTLEY CRÜE drummer Tommy Lee has uploaded professionally filmed video footage of his solo during the band's "The Final Tour". The three-minute clip, which was directed and edited by Bobby Hewitt, with audio by Nick Thayer, can be seen below.

Dubbed "The Crüecifly", Lee's current drum stunt sees him bolted to a platform that moves on a roller coaster-type track near the arena ceiling, passing the band's inverted-pentagram lighting rig and spiked disco ball and spinning him 360 degrees vertically, rendering him upside-down.

Lee told ABC News Radio, "I've been wanting to do [this] my whole life, and [other tours have been] leading up to this. This is like the mothership."

Regarding how "The Crüecifly" came together, Lee said: "We started drawing it on paper one day, and you know, those cocktail napkins turn into reality and then you sit there and go, 'OH MY GOD.'"

He added: "I wanted to add an extra seat. We're still kinda messing around with the insurance company, because it's one thing to insure me over the audience, but it's another to insure another just regular folk that I pick out of the crowd. That's a whole other animal, so we're working on it."

"The Final Tour", which features legendary rocker Alice Cooper in the support slot, kicked off on July 2 in Grand Rapids, and after the July 4 show in Milwaukee, Lee tweeted why "The Crüecifly" was absent. He wrote: "Hi guys! Want you to know certain venues cannot handle The Crüecifly! It's not our fault their roof cannot hang the rig! It's massive!"

Asked how long it took him to get used to riding the roller coaster while performing a drum solo, Lee told Music Radar in a 2011 interview: "I still don't know if I'm used to it! Everything to do with this is absolutely wrong. Playing upside down is insane. It's two or three times more difficult than what's normal. Your feet want to come off the pedals, your arms want to drop down — all of your body is fighting gravity. The only time it's comfortable is when you're in the down position; the rest of the time, everything's fucking out of control. The drum roller coaster is wild! [laughs]"

Lee's 360-degree roller coaster drum kit was officially "retired" in May 2013 in Atlantic City, New Jersey. The kit, which was introduced during the band's 30-year anniversary tour with POISON and the NEW YORK DOLLS in 2011, was described by The Hollywood Reporter as "a revamped version of the percussive light show Lee used in tours during the late 1980s. The 360, also known as The Loop, had a passenger seat for one lucky fan to ride shotgun with Lee at each show. Lee usually performed one or two complete rotations on the roller coaster himself, along with numerous half-rotations as teasers, before taking on an audience member for an additional two or three turns."