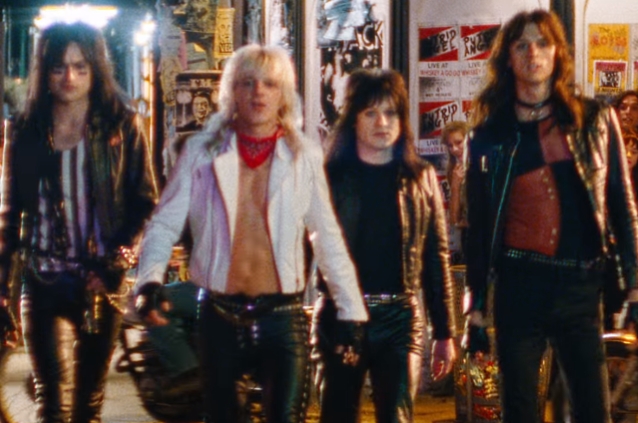 A teaser for the first trailer for the film adaptation of MÖTLEY CRÜE's biography, "The Dirt - Confessions Of The World's Most Notorious Rock Band", is available below. The full trailer will make its online debut tomorrow (Tuesday, February 19).

Due on March 22, the movie, which was helmed by "Jackass Presents: Bad Grandpa" director Jeff Tremaine, was picked up by Netflix after being previously developed at Focus Features and before that at Paramount.

MÖTLEY CRÜE recently recorded four new songs for "The Dirt" movie. Bassist Nikki Sixx described the recordings as "real and raw. Everybody is playing like mad and the songs crush," he wrote on Twitter. "[Producer] Bob Rock brought the sounds."

One of the new songs — a collaboration with rapper Machine Gun Kelly — will receive its premiere on the February 21 edition of SEX PISTOLS guitarist Steve Jones's radio show, "Jonesy's Jukebox", on the 95.5 KLOS station in Los Angeles. The program will also see Sixx sitting down for an interview with Jones on the KLOS Subaru Live Stage.

Machine Gun Kelly told Billboard that he got his part in the movie after "a six-audition process. The first two, I was auditioning for Nikki Sixx, and then the last four for Tommy Lee, over the course of two and a half years," he said.

Based on a Crüe Story. #TheDirt

Based on a Crüe Story. #TheDirt