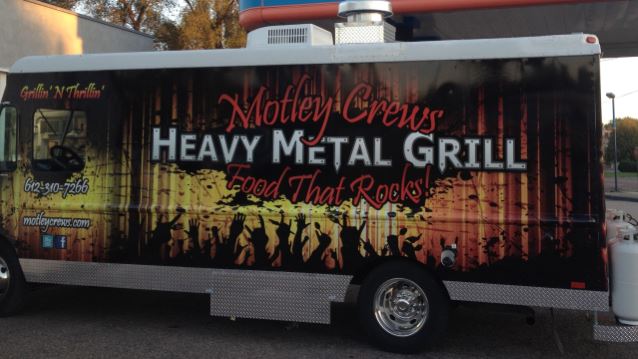 According to StarTribune.com, a Motley Crews Heavy Metal Grill food truck exploded late Friday night (March 6) in Lakeville, Minnesota, damaging up to 20 homes and injuring two people. Police suspect the blast, which happened just after 11 p.m., was related to a propane tank on the truck.

"My kids are all asleep and it's like a bomb went off, honest to goodness," neighbor Jason Anderson told Kare11.com. "Everything off the walls in our house, windows broken. We came outside, thought a house went up. We realize all of a sudden it was the food truck."

"We have some garage doors that have blown in, front window on a home next door that has been blown in, and rather significant damage to the home where the vehicle was in fact parked," said Lakeville Deputy Chief of Police John Kornmann.

Marty Richie of Lakeville started Motley Crews Heavy Metal Grill — which apparently has no affiliation with the band MÖTLEY CRÜE — in 2012 and went full-time with the operation in 2013 with his partner, Lisa Caulfield.

Richie explained how he first came up with the idea to start Motley Crews Heavy Metal Grill. He said: "Motley Crews Heavy Metal Grill came to life one day after reading an article about the food truck craze on Entrepreneur.com and it hit me like a bolt of lightning. With over 15 years in the restaurant industry and 12 years of marketing experience, a food truck would be my destiny!"

He continued: "Growing up in the '80s was absolutely awesome! I mean, like, totally awesome! A timeless generation of quirky catch phrases, freaky fashion and music, oh, yeah, the music! '80s rock is still alive and as strong as ever, many are still rocking today and local bands like HAIRBALL keep this generation alive!

"An '80s-rock-themed food truck it [was going to] be, [and] now I needed a name. I knew that I did not want to brand myself as a certain type of food truck and that I wanted the freedom to change my menu with the season or for that matter the mood I was in. This would not be possible with 'Hot Dog' or 'Philly' stamped on the side of my truck. 'Food That Rocks' is what I [decided to] make."

According to the Minneapolis Eater, Richie recently found a year-round restaurant space at 20851 Holyoke Ave. in Lakeville, which he planned to open in June of this year.

The restaurant was supposed to expand upon the beer-friendly food menu already offered on the truck that includes several varieties of Philly sandwiches, burgers and seasoned pretzels.

The restaurant expected to have a full bar.

Richie told WCCO Radio's Al Schoch that the truck involved in the explosion was the only one he had.