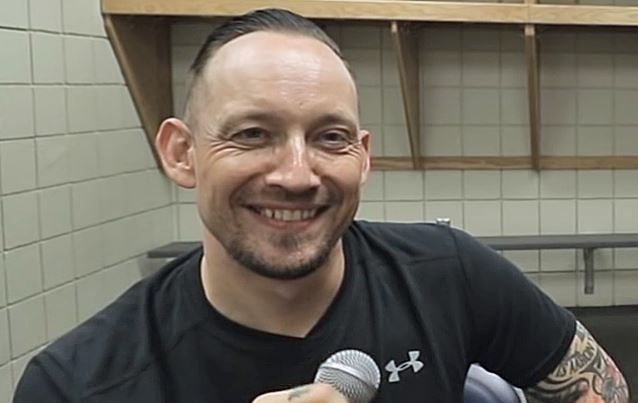 Chow conducted an interview with guitarist/vocalist Michael Poulsen of Danish/American rock 'n' rollers VOLBEAT on August 26 in Fargo, North Dakota. You can now watch the chat below.

Speaking about the VOLBEAT songwriting process, Michael said: "It can happen anywhere at any moment. Mostly I will have a certain idea about the melody for the chorus. I'm a sucker for melodies. Mostly I'll be having those melodies in my head for the vocals and afterwards I put guitars on it. Back in the days, when I had a death metal band [DOMINUS], in the early '90s, it was more about the riffing and then you put the growling on top of it. It's quite the opposite with VOLBEAT. I work more with the vocals and melodies and I put the guitars underneath. It depends on what kind of song it is. Other times I'll just be sitting on a couch with an acoustic guitar or I'll be walking the dog and then suddenly a melody pops up. It happens all the time, because I'm always early up and walking my dog early in the morning. I just love the peace and quiet on the countryside, so a lot of ideas just pop up. And I'll be singing to my mobile, and when I come home after walking the dog, I'll pick up the guitars and put guitars underneath the vocals. Or I can be in a theater and suddenly the soundtrack sounds amazing. So there's a lot of ways to do it. But with VOLBEAT, it seems to happen after I get the melody with my vocal."

VOLBEAT spent most of the summer in Europe, but returned last month for SEETHER's Rise Above festival in Maine on August 6, the Heavy Montreal event on August 7, and an opening slot for METALLICA at the U.S. Bank Stadium in Minneapolis on August 20.