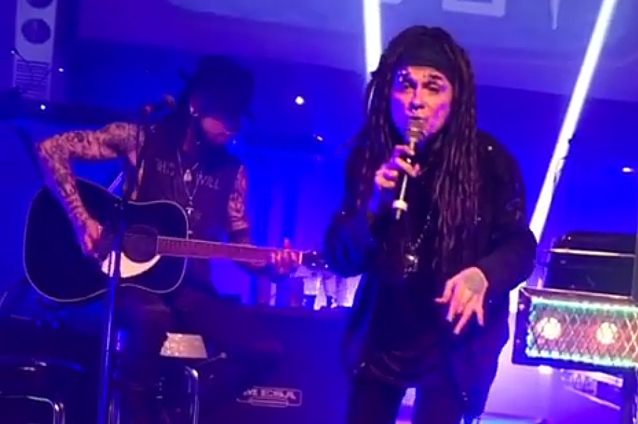 Industrial metal pioneers MINISTRY were joined by JANE'S ADDICTION guitarist Dave Navarro and Chris Connelly for an acoustic performance of their early song "(Every Day Is) Halloween" at their two Los Angeles shows at the Fonda Theatre on Thursday, December 20 and Friday, December 21.

Although MINISTRY leader Al Jourgensen claimed at Thursday's concert that the band had never played the song live before, Setlist.fm contradicts that statement, listing 11 performances of the song in the band's early career, most recently in 1987.

MINISTRY will enter the studio in early 2019 to begin recording the follow-up to this year's "AmeriKKKant" album. Jourgensen told Consequence Of Sound in a new interview: "This [fall] tour pretty much closes out our touring on 'AmeriKKKant', and then we immediately, as of the first of the year, go into starting to record the new MINISTRY record. I have a studio in my house that is currently under construction to make it ready for next year. So when I go back, we'll go right into production on a new MINISTRY record and just record for, like, the next six months — very similar to what we did for [1988's] '[The Land Of] Rape And Honey' — and just record a bunch."

Last month, Jourgensen told Billboard that he was back on speaking terms with his former MINISTRY bandmate Paul Barker. "We're actually talking about doing something in the very near future," Jourgensen said, "so who knows what may pop up on the next MINISTRY album. That's really gonna get the old-school crowd going."

Barker was with MINISTRY from 1986 to 2003 and was the sole other constant member of the band through that time. He left after touring to support the "Animositisomina" album.

Released this past March, "AmeriKKKa" was produced by Jourgensen and was recorded at Caribou Studios in Burbank, California. The artwork was created by Mister Sam Shearon.