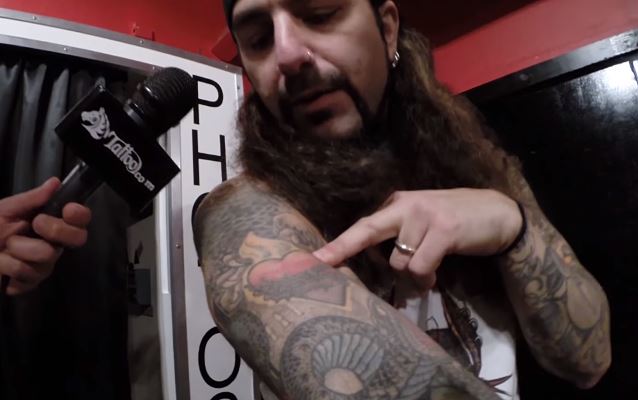 Drummer Mike Portnoy (THE WINERY DOGS, METAL ALLEGIANCE, DREAM THEATER, AVENGED SEVENFOLD) recently spoke to Tattoo.com about his tattoos and current musical projects. You can now watch the chat below.

Portnoy, who co-founded DREAM THEATER 30 years ago, abruptly quit the band in September 2010 while on tour with AVENGED SEVENFOLD. He has since been replaced by Mike Mangini (ANNIHILATOR, EXTREME, JAMES LABRIE, STEVE VAI). Portnoy later revealed that he tried to rejoin DREAM THEATER, only to be rebuffed.

THE WINERY DOGS, which also features guitarist/vocalist Richie Kotzen and legendary bassist Billy Sheehan (MR. BIG, TALAS, DAVID LEE ROTH), released its sophomore album, "Hot Streak", on October 2 in North America on Loud & Proud Records via RED (a division of Sony Music Entertainment) and in the rest of the world via earMUSIC.

In a recent interview with Metal Assault, Portnoy talked about how leaving DREAM THEATER five years ago has freed him up to get involved with a number of new projects. He said: "It's been amazing. I would say in the last five years of my career, I've done more than what most people do in their entire careers, probably times ten, actually. I've played in a dozen different bands, I've done a dozen different albums, and I wouldn't have been able to do any of those things had I stayed. I would have been wondering 'what if', if I hadn't left. I needed to explore these things, to do the album I did with METAL ALLEGIANCE, to play with musicians like Billy Sheehan, Richie Kotzen and Steve Morse, and all these different people that have helped me go into different areas, musically. It's been an incredible experience, playing with TWISTED SISTER, STONE SOUR, AVENGED SEVENFOLD, jamming with Ace Frehley and Peter Criss, and the list goes on and on and on. Everything I've done in the last five years is the stuff dreams are made of."