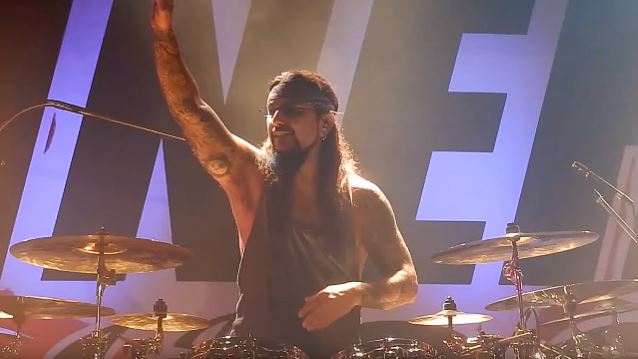 Rodney Holder of Australia's Music Business Facts recently conducted an interview with Mike Portnoy (DREAM THEATER, THE WINERY DOGS, AVENGED SEVENFOLD). You can now listen to the chat using the audio player below. A few excerpts follow (transcribed by BLABBERMOUTH.NET).

On the current state of the music business:

"Well, as you know, it's at its, probably, toughest point in the history of music. Record sales are at an all-time low, and record companies and labels are folding left and right, and it's just a tough time all around. That being said, though, I think it's created many opportunities that have actually benefitted the artist. I think for so many years… When I was starting out in the '80 and early '90s, the only way a band could get any kind of exposure, you had to sign away your life to a shitty record deal and the record companies kind of screwed you and kept everything to themselves while the artists weren't making anything. So everything was always loaded in the corporate side's favor and against the artist. Now, these days, it's sad because all the labels are closing, everything's folding, but at least the artists are in a position where now they can control their music. So I think that much is a good thing. I like the fact that, at this point, I don't have to be at the mercy of a record company to have a video seen or have a song heard. You have the Internet and you have YouTube and Twitter and Facebook that you could all utilize to yourself. So as much as it's a tough time, I think in a lot of ways, the artist is kind of getting the music back, which is nice in that respect."

On whether he is very involved with taking care of his business affairs:

"To be honest, I'm pretty horrible with the business side. Not only do all the bands I'm in — we have managers and agents and lawyers and all that crap — but even generally within the band chemistry of all the bands I'm in, I'm usually not the one that oversees that stuff. And luckily, I've aligned myself with other people in my bands that are generally good in that department. I've always been very much a leader in all the bands I've been a part of — I'm very, very hands on in every area — except for the business. That's the one area that I kind of shy away from, and I spend more time concentrating on the creative side. The merchandise and the web sites and the fan clubs and the discs and the directing and the producing, that's all the stuff I spend my time obsessing over. I have to admit I'm not the best business guy."

On whether most of his income these days is generated from live performances:

"Yeah, that's where most musicians are making money these days — is on the road. Merchadise is a big part of it. There's not much money in terms of record deals. When I was with DREAM THEATER, we were getting record budgets of seven hundred thousand per record or whatever. These days, those kind of budgets don't exist anymore, and luckily, you don't need budgets like that these days. These days, you can have your own home studio and make an amazing-sounding record for twenty thousand dollars and it will sound as good as anything else out there. So, luckily, you don't need those kind of budgets anymore, but the labels giving those kind of budgets, those days are gone. So, artists these days, you have to make your money on the road… touring, merchandise… wherever else you can — wherever you can kind of figure out a way to monopolize your situation."

On whether the music business has made him what some would consider a wealthy man:

"Well, everything is… Everything is… subjective… I don't know. I think I've been able to live a very comfortable lifestyle — thank God — but it didn't happen overnight. I've been doing this for thirty years now, so it was an accumulative thing that took many, many, many years of incredibly hard work. I mean, I'm one of the hardest-working drummers in the world. So I work my ass off for what I have. And I do have a wife and two children. My daughter's in college. So I work really hard, and luckily I've been able to provide for them comfortably. But it's all… you know, it's all… I don't know the word I'm looking for. But it's all in proportion. Yeah, I may do well compared to a lot of younger bands, especially compared to other bands that are in the metal or the prog world, but sure enough, if you compare me to a pop star or a rap star or an athlete, the way I live is extremely modest. So, you know, it's all… It's all relative; that's the word I'm looking for. It's all relative."