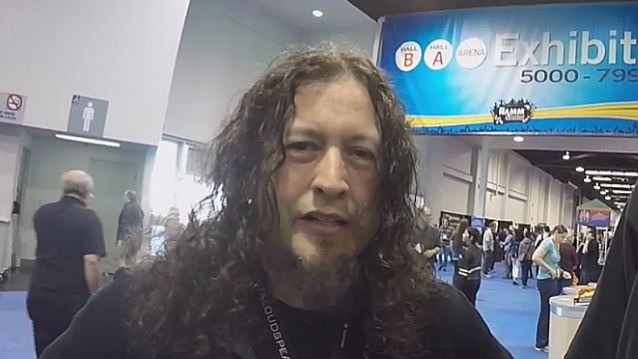 Ishibashi Music conducted an interview with QUEENSRŸCHE guitarist Michael Wilton at last month's NAMM show in Anaheim, California. You can now watch the chat below.

Asked about QUEENSRŸCHE's current and upcoming activities, Wilton said: "QUEENSRŸCHE has lots of plans for 2015. We're working on a new record. Our last record did really well for us. We did two years of touring on that. We're just rebuilding the whole landscape for touring. We've got a lot of people behind us that are really supportive. And what that means is basically reclaiming all the territories around the world, rebuilding all the bridges — just lots of great things happening for QUEENSRŸCHE."

QUEENSRŸCHE recently launched a PledgeMusic campaign, "Building The Empire", for the band's next album. QUEENSRŸCHE is offering everything from limited-edition vinyl and merchandise to the actual instruments played on the upcoming album and a chance to hang with the band in their hometown of Seattle. In addition, the band is attempting to raise $2 million by selling stakes in what QUEENSRŸCHE securities attorney, Marc LoPresti, called a "new holding company for all things QUEENSRŸCHE" that will receive the revenues from its tours, merchandising, album sales and digital downloads.

For a minimum investment of $50,000, fans who pass an independent accreditation process can purchase an equity ownership stake from a private consolidated holding company that entitles them to "a fixed percentage" of future revenue.

QUEENSRŸCHE's stock deal utilizes a provision of the 2013 JOBS Act that allows promoters to publicize a private stock placement, though only "accredited investors" are eligible to invest.

An internal board of directors comprising Rockenfield, Jackson and Wilton and band counsel Thomas Osinski will oversee the corporation.