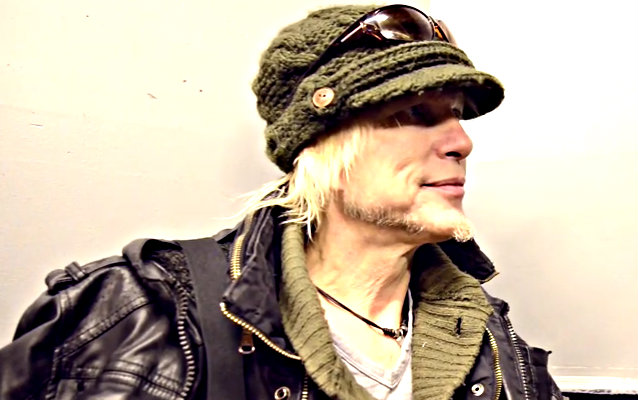 DarkoPhoto.com conducted an interview with legendary German guitarist Michael Schenker (UFO, SCORPIONS) in January in Toronto, Ontario, Canada. You can now watch the chat below.

"Bridge The Gap" is described in a press release as "an album of 13 hard-hitting, adrenalin-fueled melodic rock'n'roll songs that showcase Schenker's distinctive and explosive guitar playing."

The album was recorded from January to March 2013 at Kidroom Studios, Germany and was produced by Michael Schenker and Michael Voss, and engineered by Voss.

In a recent interview with llinois Entertainer, Michael Schenker stated about the "Bridge The Gap" album title: "I had the title already in my head the moment Francis Bucholz (of SCORPIONS fame) joined the band on bass.

"After Pete Way wasn't doing so well, we had to start a European tour. I asked Herman (Rarebell, also from SCORPIONS) to check on Francis to see what he was doing. Francis was more than happy to do it, and here we are together again for the first time since we did the 'Lovedrive' (1979) album.

"Right away I wanted to arrange to capture this on DVD just in case something happened, but the band was getting stronger and stronger with each show. The audience loved it, and then we loved it too. The chemistry was great.

"We were in between tours, we had about six months off, so I decided it would be a great time to record a new album. Everyone agreed, so I sat down and looked at the stuff that I had collected over the last few months, and we put together the material, gave it to Doogie [White, vocals] to work on. I told him about the concept of bridging the gap, because that's how I felt about working with two old friends again. Also, Wayne Findlay (a long time member of MICHAEL SCHENKER GROUP) was developing very nicely of a seven-string guitar sound, and I wanted to incorporate that into the music.

"We're using Michael Schenker as a platform to create a real band identity, and we're combining the traditional way of songwriting and adding Wayne's input, which becomes this new element in the music. And I develop as well between albums, so there is always something new that nobody has ever heard before because I've developed it from within myself.

"I like moving forward, and I enjoy adding new colors to my music.

"This title fits in today just about everywhere."