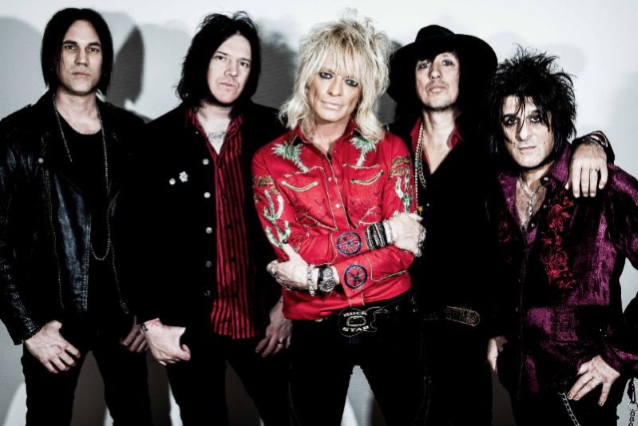 Michael: "I'm 100 percent happy with the album. I wouldn't put out anything less than all killers, no fillers. The band is stronger and better than ever, so I feel very excited and, dare I say, optimistic about the future of the record, because we have a good team around it. You need a team to make the dream work. The reason why we waited for the album to come out was [because] we didn't have a record deal... We didn't have a label. We didn't have management. This band has never had proper management until about a year ago... Through them, we got a record company, Silver Lining, and UTA, the booking agency. I wanted to get the right team around this record before putting it out. I'd rather wait than having nothing to wait for, so to speak... I know it's a good record. I feel strongly about it, and I feel like it's got its own personality. It's different from the last three [records] in a cool way."

On the album's diversity:

Michael: "There's a lot of variety, which is great. It's not only about having great songs, but also about the style of the music was going into a direction that I liked. It was like all the bands we love, like THE DAMNED, MOTT THE HOOPLE, THE CLASH — these influences were coming through... We rock hard when we rock hard, but then you also need the other extreme as well. The writing process, I've never planned anything in my life. We never plan anything — we just do it. We write songs and send it to each other and say, 'What do you think?' I give everyone the freedom and encourage this band to write as much as possible and be creative. There's a lot of talent in this band, a lot of creative energy. It's great to have guys taking the pressure off me having to write everything myself... It takes a lot of pressure off of me having to write every single word. The chemistry in this band is incredible, and the vibe is very positive always... This band is really special. We're the best of friends. We have a great, positive vibe that comes across. We can't fake it. It comes across on stage and comes across on the record if you're having a good time making it and doing it. If it's like pulling teeth, you can tell. You can't fake it — you can always tell if someone's not doing it for the right reasons."

On self-producing the album:

Michael: "Me and Steve [Conte, guitars] and Rich [Jones, guitars] ended up kind of being the producers of the album. It wasn't planned that way, but we decided to write from scratch with the recording engineer, Petri Majuri, who also has mixed the last three albums. We decided that this time, we're going to start with him from the beginning and not hire a producer [and] produce it ourselves. We've produced our own records — we know how to do it. We don't need someone just standing there saying, 'Okay. That sounds good.' We had 18 songs altogether [that] we recorded, and then we had to choose. I like albums that are short enough so you want to hear it again after you're done listening to it. Even if you have brilliant songs, I think 15, 16 songs is too much. Your ears are tired. I wanted to keep it short."

On the album's guest appearance by THE DAMNED's Captain Sensible:

Michael: "That was great. THE DAMNED [is] one of my favorite bands of all time. [Bassist] Sami Yaffa's as well. Sami and me really think that THE DAMNED are one of the greatest bands ever, and they are totally underrated. They should be way more famous than they are. I called Captain — we've seen each other on and off since the early '80s, and we've been friends, and I love everything he does... At the studio, I figured, 'That song sounded kind of like THE DAMNED a bit,' so I decided to call Captain and see what he says. He said, 'Send the song over — I'll see.' I sent the song to him, and he replied right away. He said, 'Love the song. I'll have something for you in a couple of days.' The next day, I had an e-mail from him. I listened to the solos — totally perfect. I went to the guys and said, 'Guess who's playing the solo?' It was perfect."

Monroe will release his new album, "One Man Gang", on October 18 via Silver Lining Music. Recorded and mixed by Petri Majuri at E-Studio in Sipoo, Finland over three weeks in March 2018, the 12-song record was mixed that following autumn with Monroe and bandmates Rich Jones and Steve Conte on production duties.

The Monroe band's all-star lineup features former HANOI ROCKS and NEW YORK DOLLS bass player Sami Yaffa, who has played with Michael since the '80s, and and drummer Karl Rockfist (who has played with notable acts such as DANZIG). On guitar are Rich Jones (formerly of the Ginger Wildheart band) and Steve Conte (best known as the guitarist who filled the void left by Johnny Thunders in the NEW YORK DOLLS, as well as playing guitar with many other name acts such as Suzi Quatro, Eric Burden and many more).