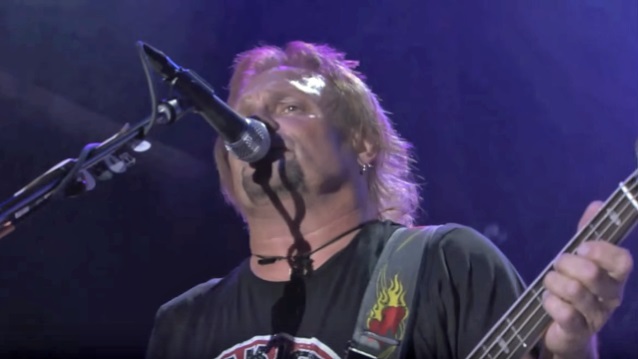 "It started out going well and then it didn't go too well," he said of the trek. "I remember the first show I played, Sammy said, 'Yeah, I think Dave is going to come out and join us,' and Dave never came out of his dressing room and he became a recluse and I never really saw him."

Anthony also talked about VAN HALEN's ill-fated 2004 reunion tour with Hagar, which saw the bassist signing a contract that drastically reduced his income for the tour. In addition, Eddie Van Halen was dealing with health issues, with Sammy later writing in his 2011 memoir, "Red: My Uncensored Life In Rock", that the guitarist "looked like he hadn't bathed in a week" when the two of them saw each other in the flesh for the first time in a decade.

"Eddie was in bad shape," Michael said. "We did 80 shows and had to pull the plug because it was just too much work. And I hated having to wake up the day of the show and think, 'Which Eddie Van Halen are we going to get today? The Jekyll or the Hyde?'"

In 2007, the Van Halen brothers, Wolfgang Van Halen and Roth announced they would be hitting the road for a reunion tour. Anthony later told Music Radar that he "found out about that tour like everybody else did — in the press."

Anthony has played primarily with Hagar in the 14 years since he last performed with VAN HALEN, in groups like CHICKENFOOT and THE CIRCLE.