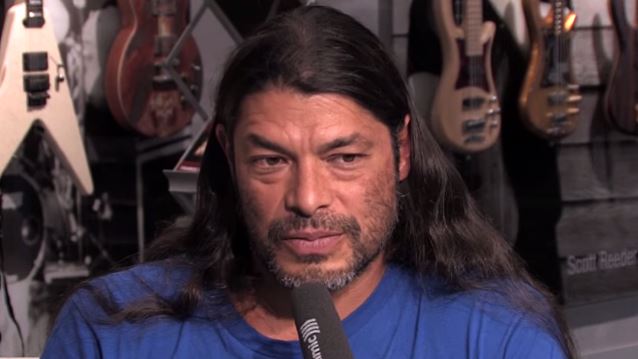 METALLICA bassist Robert Trujillo was interviewed by Jazzrock TV when he resurrected his MASS MENTAL project for an exclusive reunion concert on September 6, 2014 during the Warwick Open Day 2014 in Markneukirchen, Germany. Trujillo talks about his beginnings in music, the fusion and jazz-rock roots, the upcoming METALLICA album, Warwick basses and the Jaco Pastorius movie.

The documentary film on the life and music of bass legend Jaco Pastorius, "Jaco - A Documentary Film", was produced by Trujillo and Johnny Pastorius, Jaco's son, and directed by acclaimed director Paul Marchand.

Trujillo told LA Weekly that "Jaco - A Documentary Film" has already cost him a lot of money out of his own pocket. Trujillo revealed: "When you are trying to do it right, it's costly. I've been a part of this film for five years. I've spent a huge chunk of money. It's great because I feel it needs to be done, but I have [other] responsibilities, too."

Trujillo explained that just because he is a member of METALLICA, that doesn't give him access to unlimited funds, saying, "People don't understand. I didn't write [METALLICA's huge hit] 'Enter Sandman'. It's a little different for me."

Despite insisting that work has been proceeding on a new album, METALLICA has spent a lot of time outside the studio in the last year, with activities that included a string of European all-request shows last summer, a week-long residency on "The Late Show With Craig Ferguson", and this month's Rock In Rio USA stint.

More festival dates are on the schedule for this summer, including two shows in Montreal and a headlining slot at Lollapalooza in Chicago at the end of July.