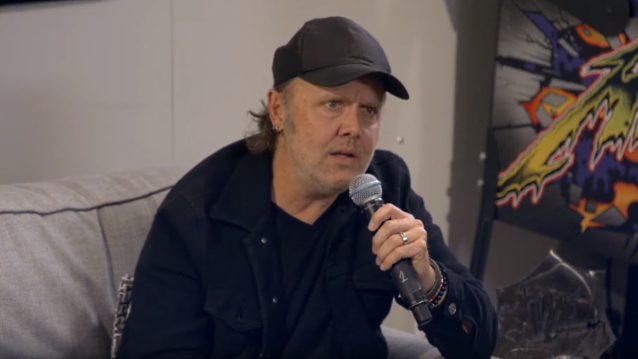 During a press conference at the METALLICA headquarters in San Rafael, California, drummer Lars Ulrich was asked how the band will go about choosing the songs for each setlist and what fans can expect to hear at each of the shows.

"As far the setlist is concerned, these shows are seven, eight months away, and the ones in the fall are almost a year away," he said (see video below). "I really don't think that much about the setlist that much in advance. We like to go deep, and, obviously, anybody who knows us knows that we like to dust off things that we haven't played for a while.

"As I've circled through this in my Danish brain a couple of times, the one thing I haven't quite figured out is — our production manager, Dan Braun, refers to them as the 'toe-tapping favorites,'" he continued. "So there's, obviously a few toe-tapping favorites, quote-unquote, and so I have to figure out how to split them up and what to do about those, and then the rest of it will come together.

"It will be fun, it will be challenging, but we thrive on this shit," he added. "And anytime we get a chance to do anything outside of the norm, METALLICA are four very happy guys. We kind of thrive on sometimes chaotic energy. And this will come together. I don't wanna freak anybody out here, especially Danny [Wimmer], but it may not come together until about 24 hours before the first show, but it will definitely come together."

According to Ulrich, part of what makes METALLICA work is that he and his bandmates "don't overplan this stuff. We don't overplan it, we don't overthink it, so we prevent ourselves from getting too robotic," he explained. "There always has to be a human element and an impulsive element and a momentary element, and so we always try to find that right balance. But I'm sure by the time we show up in North Carolina, which is the first show, we will have it somewhat together.

The five festivals are:

* May 1-3 - Epicenter at its new location at the Charlotte Motor Speedway in Charlotte, NC
* May 8-10 - Welcome To Rockville at its new location at the Daytona International Speedway in Daytona Beach, FL
* May 15-17 - Sonic Temple Art + Music Festival at MAPFRE Stadium in Columbus, OH
* September 18-20 - Louder Than Life at Highland Festival Grounds at KY Expo Center in Louisville, KY
* October 9-11 - Aftershock at Discovery Park in Sacramento, CA

Tickets for all five festivals will go on sale October 14. Each festival's lineups will be announced on a future date.