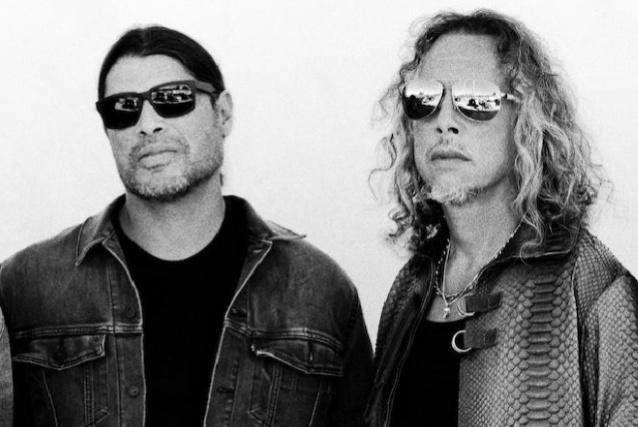 According to KWTX, METALLICA guitarist Kirk Hammett and bassist Robert Trujillo spent Sunday and Monday at the newly opened Central Texas surf park BSR Surf Resort. They reportedly rented out the property for a bachelor party to enjoy some private time catching man-made waves at a facility that's the only one of its kind in the world.

According to the American Wave Machines web site, PerfectSwell "is the first and only air-pressure system to create naturally occurring ocean swells for authentic world-class surfing." The artificial surf pool pumps waves in the three-to-eight-foot range, and three-wave sets.

Users can choose the type of wave they want to ride. The software is able to generate beach break, point break, or peeling waves. The goal is to mimic the ocean and its waves.

The surf park opened in May and will be the official wave pool for training the U.S. Olympic surf team.

Hammett and Trujillo are frequent surfers. When they're not playing stadium-sized concerts, you may find them riding waves in Portugal or Morocco. Trujillo had even partnered with a famous Australian surf brand to market a line of boardshorts.

METALLICA IN TOWN: Sounds crazy...it wasn't music but surfing that brought the heavy metal icons to Central Texas. The full story ahead at 5.
??? #surfsup #tellmesomethinggood #metallica

Those who know me, know Metallica is my favorite band of all time....Well, today I got to shoot them surfing all day at...