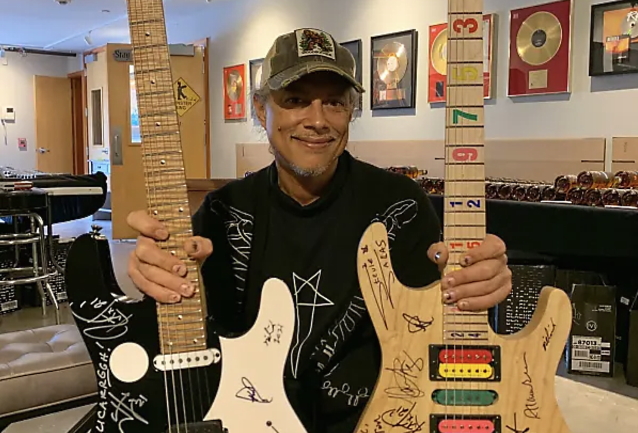 METALLICA, Steve Vai, Paul Stanley and Joe Satriani are among the icons of the guitar-playing world who have donated instruments and autographed guitars to help guitarist and composer Jason Becker. Eight of these instruments are now for sale in the official Jason Becker Reverb shop, with proceeds going directly to The Jason Becker Special Needs Trust.

Becker — the composer, virtuoso musician, and former child guitar prodigy — has been suffering from ALS for more than 30 years, but that hasn't stopped him from creating music. His latest album, "Triumphant Hearts", was released in 2018, after Becker composed the music via computer using his eyes and enlisted heavy hitters like Marty Friedman, Joe Bonamassa, Joe Satriani, Uli Jon Roth, Neal Schon, Jeff Loomis and Paul Gilbert to play the parts.

Earlier this year, during a severe health scare, Becker's family, friends, and fans rallied together again to aid Becker, launching the #ShredForJasonBecker livestream fundraisers on Herman Li of DRAGONFORCE's Twitch channel and getting together all of the guitars you can now find in Becker's Reverb shop.

But that's merely one of the star-signed instruments for sale.