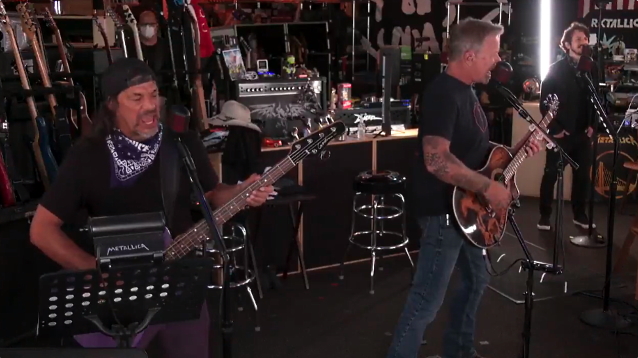 A preview clip, featuring METALLICA's performance of the song "All Within My Hands", is available below.

Says METALLICA: "This special acoustic show marks our second concert benefitting All Within My Hands and will include an auction with some awesome items! The best part? 100% of money raised from this event will go directly to help someone in need.

"The show kicks off at 2 p.m. Pacific Time, but don't worry if you can't catch it live. There are four ticket options available and each one allows you to watch the show as many times as you like within a 48-hour period once you start the stream."

Includes presence on Virtual Fan Wall for one song during the performance, one event t-shirt by fan favorite artist WolfSkullJack, the audio digital download of the show (MP3), and the ability to watch live as well as during an on-demand window following the event.

Includes one event t-shirt by fan favorite artist WolfSkullJack, the audio digital download of the show (MP3), and the ability to watch live as well as during an on-demand window following the event.

Includes the audio digital download of the show (MP3), and the ability to watch live as well as during an on-demand window following the event.

Includes the ability to watch live as well as during an on-demand window following the event.

All Within My Hands is a 501(c)3 non-profit foundation established in 2017 as a way for the METALLICA family to give back to communities that have supported the band. Just this year, AWMH has donated $645,000 to COVID-19-related relief funds including Feeding America, Direct Relief, as well as to charities assisting those in the entertainment and hospitality industries suddenly without work. More recently the foundation donated $350,000 to aid those affected by the West Coast wildfires. Finally, the foundation's Metallica Scholars Initiative is now in its second year, supported by a $1.5 million grant benefiting 15 community colleges across the country.

METALLICA and All Within My Hands are committed to running an organization of the highest integrity where expenses are kept to a minimum and are paid for entirely by the band, the board, and friends who have worked with the band over many years and are excited to help in this mission. As always, 100% of proceeds from this year's "Helping Hands" event — tickets, fees and auction items — will go directly to help those in need, with METALLICA and the foundation covering all production costs and expenses.

In early May, the four members of METALLICA overcame social distancing to record a new version of their song "Blackened", with each member separated in his own home. The split-screen video was posted to the band's social media channels. That same month, Ulrich told Swedish talk show host Fredrik Skavlan that he and his bandmates were "sending ideas to each other via e-mail and via Zoom and [trying to] make music in these unusual situations."

In August, METALLICA broadcast a show to hundreds of drive-in and outdoor theaters across the U.S. and Canada, as part of the "Encore Drive-In Nights" series. The concert was filmed nearly three weeks earlier, on August 10, at the Gundlach Bundschu winery, about a 30-minute car ride from the band's headquarters in San Rafael, California, and was subsequently edited and mixed by the band's award-winning production team to the highest standards possible.

We're getting closer to the Helping Hands Concert & Auction! The show streams worldwide on Saturday, Nov 14 and all proceeds from ticket sales benefit @AWMHFoundation! #HelpingHands2020