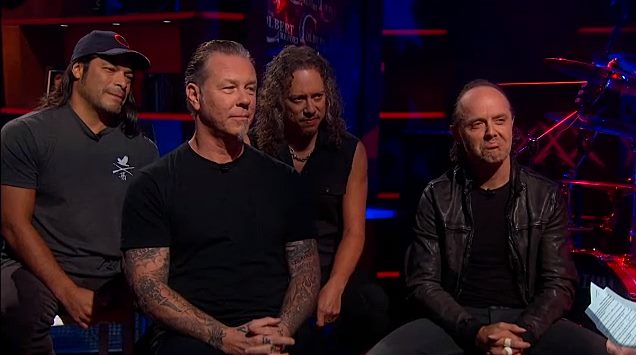 METALLICA sat down for an interview and performed two songs — "For Whom The Bell Tolls" and "Master Of Puppets" — on Comedy Central's "The Colbert Report" on Tuesday (September 24). Check out video footage of their appearance below.

METALLICA is on the promotional trail for its new 3D movie, "Metallica Through The Never", which opens this Friday (September 27) on IMAX screens before expanding to more theaters on October 4.

The Pulse Of Radio asked METALLICA bassist Robert Trujillo — currently in his 10th year with the group — if he ever thought when he joined the band that he would end up being one of the stars and executive producers of a major motion picture. "Um, no, I never thought that," he said. "Welcome to the world of METALLICA, you know. It's an interesting journey. I mean, you jump into creative situations that you would never imagine, and it's hard work. I mean, everything that we do is very exciting, but at the same time, it's always a challenge."

Prior to Tuesday's appearance on "Colbert", METALLICA played a gig on Saturday night (September 21) at the famed Apollo Theater in New York City.

METALLICA frontman James Hetfield was asked by The Telegraph what the release of "Through The Never" — which combines concert footage with a fictional storyline that borders on the surreal — meant to the band's careers.

The singer/guitarist replied, "What does it mean for our careers? We don't care. We've never really cared, but at this point we really don't. We're artists, and we're driving this train — we can drive it straight into the wall if we want to."

With the movie getting mixed reviews, drummer Lars Ulrich said, "So far, everybody's got a different opinion about it, which is great, because if there's anything we love in this band, it's ambiguity. We're not trying to force some next-level message down your throat. Without sounding too artsy, the best art is handed to you to do with what you want."

The film stars Dane DeHaan as a member of METALLICA's road crew who is sent on a mysterious mission while the band performs at a sold-out arena and events outside grow more bizarre.

METALLICA reportedly spent $20 million of its own money to make the movie.

The soundtrack, which features a number of METALLICA classics performed live in the movie, was released on Tuesday. The two-disc CD came out on METALLICA's own label, Blackened Recordings, also in digital and vinyl formats.