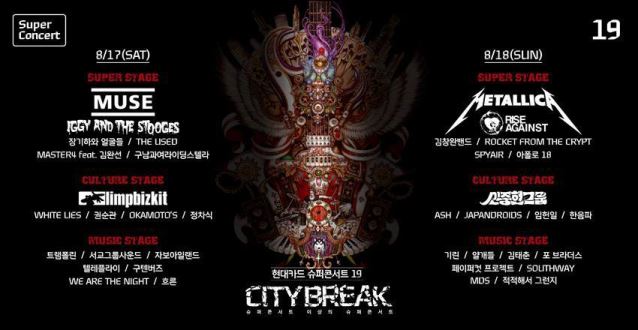 Official MetOnTour.com video recap of METALLICA's August 18 performance at CITYBREAK @ Olympic Park in Seoul, South Korea can be seen below.

The members of METALLICA gave a press conference last week in Singapore, just before the band's first-ever concert in China, where they were asked how they deal with the physical demands of touring after 30 years. Lead guitarist Kirk Hammett said, "I do a lot of yoga. We're all pretty physical. [Bassist Robert Trujillo] and I like to surf. We just got off a week-long stint in Bali, surfing a lot. You know, it's important to keep maintenance on the road — eat well, sleep well, and just make sure the engine inside is running well. It's really important. 'Cause the last thing I wanna do is drop on stage."

Drummer Lars Ulrich added, "We have two guys downstairs who take care of stretching us and putting us back into shape — our necks and our arms and everything. They're among the two hardest-working guys in rock and roll. So we take all that stuff really seriously. I mean, if you could see our [tour] rider, it's carrots and strange vegetables and nasty fruit juices. It's not what it was back in the day, thankfully. But yeah, we do take [staying healthy]very seriously. Absolutely."

Ulrich told The Pulse Of Radio a while back that his main concern about getting older as a musician was whether aging and other issues could eventually take their toll on him. "The thing that just freaks me out is I just don't know physically," he said. "'Jumping Jack Flash' and 'Satisfaction' — sure, I can probably play those when I'm 65. Playing 'Fight Fire With Fire' and 'Dyer's Eve' — I don't know. It's the unknown. I just don't know. And if it becomes a joke, or if it becomes just not physically possible to do, then hopefully we'll have the sense to bow out gracefully."

Frontman James Hetfield told the press in Singapore, "We'll do this until we don't wanna do it anymore; it's as simple as that. There's no use doing something your heart is not in. But for us, we love what we do and we're blessed that way."

METALLICA's next stop is Toronto in early September for the premiere of the band's new film, "Metallica Through The Never".

The 3D IMAX movie will make its world premiere on Monday, September 9 at the festival before opening on September 27 at IMAX theaters and expanding onto additional screens on October 4.

METALLICA will also play a special show at the Apollo Theater in New York City on September 21 to promote the release of the film.