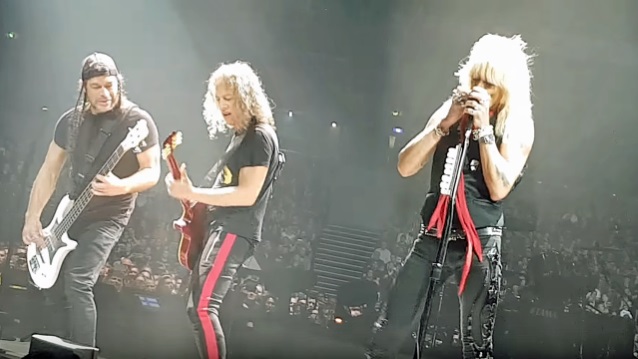 Former HANOI ROCKS singer Michael Monroe joined Robert Trujillo and Kirk Hammett on stage earlier tonight (Wednesday, May 9) during METALLICA's concert at at Hartwall Arena in Helsinki, Finland to perform his solo song "Dead, Jail Or Rock 'N' Roll". Video footage of his appearance can be seen below.

The original recording of "Dead, Jail Or Rock 'N' Roll" was featured on Monroe's second album, "Not Fakin' It", which was released in September 1989 through PolyGram. The accompanying video featured GUNS N' ROSES singer Axl Rose and received substantial rotation on MTV. It was later covered by WARRANT on that band's 2002 album "Under The Influence".

The "Dead, Jail Or Rock 'N' Roll" performance was part of the fun and unusual feature METALLICA added to its shows on the band's current European tour: at each stop, Hammett and Trujillo have been covering a track by local musical heroes — often choosing songs that are far removed from the band's traditional metal sound. The "doodles," as the band refers to them in their set lists, have been showing up right before Trujillo's solo on "(Anesthesia) Pulling Teeth".

While most of the songs are known primarily in their countries, a few are known in the U.S. and are hard rock classics, such as SCORPIONS' "Rock You Like a Hurricane", ACCEPT's "Balls To The Wall" and EUROPE's "The Final Countdown". But the duo have also performed out-of-the-box cuts like ABBA's "Dancing Queen", "Take On Me" by A-HA, FALCO's "Rock Me Amadeus" and the Italian standard "Volare".

On an earlier European run, Hammett and Trujillo covered OASIS's "Don't Look Back In Anger" while performing in Manchester, and TRUST's "Antisocial", which ANTHRAX also recorded in 1988, during a concert in Paris.

Drummer Lars Ulrich told The Pulse Of Radio that METALLICA has not played the same set two nights in a row for years. "We change up the set list every night," he said. "I mean that's been part of our m.o. for about 13, 14 years. You know, you're on these really long runs and you're playing the same set list every night, and you're just sort of like, 'We've got to shake it up a little bit, if not for anybody else, just for our own sanity.' So since then it's been a personal pride of mine that METALLICA hasn't played the same set list in about 14 years."

METALLICA has played 23 shows in Europe since early February and has one more Helsinki date booked before taking a three-month break from the road.

The band recently announced the details of the 2018-2019 North American leg of of its "WorldWired" tour in support of the group's latest album, "Hardwired… To Self-Destruct".

The 34-date trek kicks off September 2 in Madison, Wisconsin and runs through March 13 in Grand Rapids, Michigan. Each ticket purchase will be accompanied by a physical or digital copy of "Hardwired… To Self-Destruct".