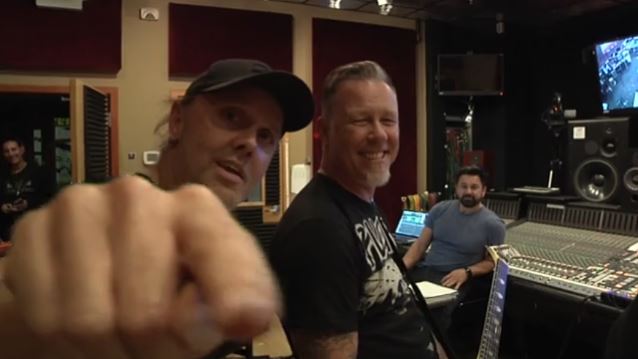 METALLICA has uploaded a new video greeting from drummer Lars Ulrich welcoming the band's fans to its newly redesigned official web site, which was officially launched last week. (Note: To watch the clip, you will need to register for METALLICA's new fan club, which is now free.) The four-minute video includes a short snippet of guitarist/vocalist James Hetfield in the studio at the band's headquarters in San Rafael, California laying down guitars on what appears to be a new METALLICA song with producer Greg Fidelman.

METALLICA guitarist Kirk Hammett last week confirmed in new interviews with About.com and Ultimate Classic Rock that the band is in the process of recording some of its new material for the long-awaited follow-up to 2008's "Death Magnetic" album. Hammett revealed: "At this point, we're still just doing basic backing tracks. James is doing his guitar stuff, and I am just kind of waiting patiently to go in there and do all of my guitar stuff."

As for what the material sounds like, Hammett said: "It's heavy. We've got some heavy stuff going. It delivers on that front, for sure. You know, I would say a lot of it is along the lines of 'Death Magnetic'. A lot of it seems to be going along those lines. But, you know, with social media now and everything else, I'm a little bit wary to comment too much on the album. We're still working on it."

Aside from touring, METALLICA has spent much of the seven years since the release of "Death Magnetic" on several other projects, including launching a music festival, recording an album with the late Lou Reed and making a feature film.

Hammett told About.com that working at its own pace is necessary for METALLICA, explaining: "One always wants to work at the pace that they're most comfortable at, taking seven or eight years between albums is a lot of time, but we've filled it up with other things."

Still, bassist Robert Trujillo told The Pulse Of Radio not long ago that the band still enjoys the songwriting process after all these years. "When we strap our guitars on and we get on the practice floor, we start writing, I mean, it's fun," he said. "And that's the thing that keeps, I think, this band so relevant, is that we actually really enjoy coming up with ideas. And the work ethic is super, super strong and that's what takes us longer than other bands, you know, because we're sitting there and, you know, sometimes we're really analyzing things."

Ulrich recently told RollingStone.com that METALLICA had written close to 20 new songs for its new album, although he declined to offer a possible release date for the new CD.

METALLICA played its last two shows of 2015 last month in Quebec and has no live dates on its schedule for the immediate future.

METALLICA recently announced plans to release four complete shows from the band's 2014 "By Request" tour on vinyl. An unboxing video focusing on the Montreal set, recorded on August 9, 2014, was made available. Three more sets recorded in Bogota, Helsinki and Istanbul will be released next month and all four will be limited to 500 copies each.