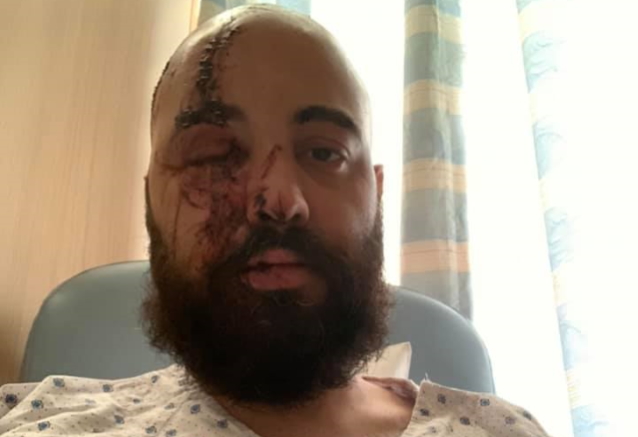 Drummer Bachir Ramadan of Dubai, United Arab Emirates-based extreme metallers NERVECELL is one of the survivors of an explosion in Beirut, Lebanon last week that killed more than 150 people and wounded over 5,000. Officials believe the cause of the August 4 blast was over 2,700 metric tons of ammonium nitrate, a highly explosive substance used in fertilizer, that had been stored at a warehouse in the city's port.

On Thursday, Ramadan posted a photo of him on with cuts on his head and face and his hand wrapped in gauze. He captioned the picture: "Survived what could have been alot worse....Thankful every second to be alive to say the least...I want to take the time thank everyone who asked about me and got in touch, i love you all. I am ok." The following day, he added: "Grateful and thankful to come out of this alive. Overwhelmed by the amount of love and support pouring in from all over the world and from each and everyone of you my dear friends, it is truly heart warming to say the very least. I am very much speechless at the moment, and it's things like these that make me appreciate life even more. Love each and every one of you my dear friends!"

Bachir's bandmates in NERVECELL also shared the photo on social media and wrote in an accompanying message: "As if it wasn't bad enough with what's been going on in the world lately, unfortunately we come to bear some unfortunate news: Bachir Ramadan (current NERVECELL drummer) was one of the thousands badly effected by the blast in Beirut, Lebanon on August 4th. Out of respect to Bachir and his family, we did not want to post about this initially when this all broke out. Now that the news is out, and more importantly he is ALIVE and survived this disaster, we ask that you all send your blessings and well wishes to him. Stay safe everyone, and may the people of Lebanon get the justice they have long deserved!"

In a separate message on his Facebook page, NERVECELL guitarist Barney Ribeiro chimed in: "I've been laying low and doing good staying away from social media for a while now, but the tragic event that took place in Beirut, Lebanon this week, followed by the news I received in the last 48 hours of my dear friend and current NERVECELL drummer Bachir has brought me back here.

"The level of negligence and corruption that exists within the authorities and government in Lebanon is undeniable. It's unfortunate, unfair and disrespectful, given how beautiful the country is and how laid back and fun loving the Lebanese way of life is. I've been fortunate to visit and perform in Beirut twice in my life, and I was always welcomed there and treated like their own. For a country that has suffered for decades now from civil war, an economic crises and social unrest... their level of hospitality is unmatched!

"A blast of this magnitude needs accountability, and I can only hope and pray that there will be a transparent investigation in the days to come, to honor and give justice back to the innocent lives of the victims affected and their families."

The blast near Beirut's port was reportedly felt as far as Cyprus, hundreds of miles away, and registered as a 3.3 magnitude earthquake in the Lebanese capital.

Formed in 1999, NERVECELL is one the United Arab Emirates' most acclaimed and best-known metal groups. They were one of the county's first death metal bands to release an album, with 2008's "Preaching Venom". They have since issued two more LPs, 2011's "Psychogenocide" and 2017's "Past, Present… Torture".

Survived what could have been alot worse....Thankful every second to be alive to say the least...I want to take the time thank everyone who asked about me and got in touch, i love you all. I am ok. ❤️?

Grateful and thankful to come out of this alive. Overwhelmed by the amount of love and support pouring in from all over...

As if it wasn't bad enough with what's been going on in the world lately, unfortunately we come to bear some unfortunate...

I've been laying low and doing good staying away from social media for a while now, but the tragic event that took place...

CNN drone footage from earlier this week shows some of the devastation caused by the massive explosion in Beirut https://t.co/G4o9Ze9oyT pic.twitter.com/6e2Cjzd74c