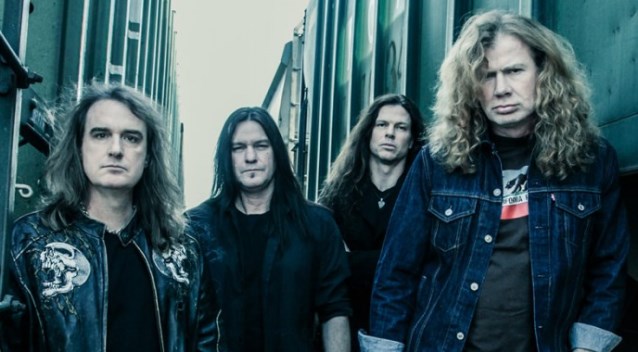 Alan Sculley of The Morning Call recently conducted an interview with MEGADETH mainman Dave Mustaine. A couple of excerpts from the chat follow below.

Mustaine: "I think 'Super Collider' is kind of like a really broad [distillation] of what our whole catalog represents. There's aggressive stuff, there's thrashy stuff, there's kind of more of the heavy metal stuff. There are some of the more introspective lyrics. There are some simple lyrics and soon and so forth. I think that's what really makes the record refreshing is that it shows everything that we've done. It's almost like a biopic of our career. It's a pretty good slice of everything I've learned over the years."

Mustaine: "Having David [Ellefson, bass] back and the relationship I have with Shawn [Drover, drums] and Chris [Broderick, guitar], we're a really strong outfit right now. Not to use a cliché, but it's pretty orgasmic. It's almost like [payback for] all of the ills and the ailments that we've had to deal with over the last however many years, with lineup changes and regime changes at labels and label changes and management changes."

Mustaine: "He [Johnny K] went home [at some point during the 'Super Collider' sessions] and I just kept forging forward and used the engineer that I was using, Cameron Webb, who's been doing a lot of MOTÖRHEAD stuff. It was really funny because Shawn Drover, our drummer, is really, really quiet and a really professional guy. And he said he enjoyed his time more with the engineer than he did with the guy that was working with me in the production seat. And I was like 'Really?' He said 'Oh yeah, just night and day.'

"I've got to tell you Cameron was very, very vital and instrumental [to 'Super Collider']. He's a great young producer. I really wish the best for him, and I know he's going to be super successful because he's young and he's totally got his finger on the pulse."

Mustaine: "We have video for all of the songs we're going to be playing and a pretty elaborate lighting set-up. We've always tried to keep the gimmicks out of our music because there are so many bands that, they just don't really have the songs, so they have gimmicks. So we try to keep it focused to the music."

Read the entire interview at The Morning Call.