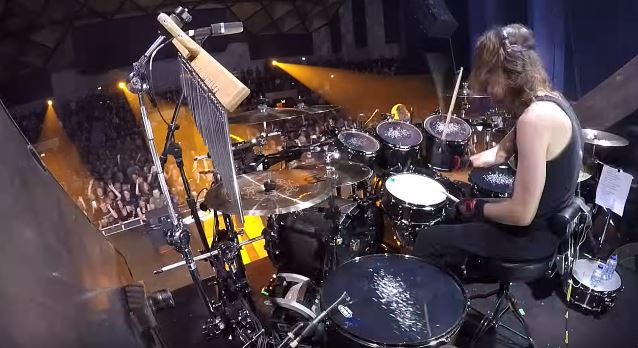 Drum-cam footage of MEGADETH drummer Dirk Verbeuren performing the song "The Threat Is Real" live at Oosterpoort in Groningen, The Netherlands on June 14 can be seen below. The clip was shot and edited by Sam Oerlemans.

In a recent interview with All About The Rock, Verbeuren stated about what it has been playing MEGADETH's classic songs on tour: "The current live set is based on [MEGADETH's latest album] 'Dystopia' and the early albums, from Gar Samuelson to Nick Menza. These guys really had their own style. Nick was actually one of my influences as a young drummer. Anyways, I had ten days to study eighteen songs. I tried to capture the intention behind the drum parts in order to respect the band's vision. Gar and Nick have a more old-school swing whereas Chris Adler's approach is more contemporary. I stay true to the originals while injecting some of my own groove and flair. Chris was very helpful in guiding me as to what the band would expect from me, which is super cool of him. It made the rehearsal and first shows a lot easier."

Asked what the most fun and favorite MEGADETH songs have been to play, Dirk said: "I really like the drum grooves in 'Wake Up Dead'. It's quite '70s-influenced with some cool accents and fills. 'Tornado Of Souls' and 'Poison Was The Cure' are a lot fun to play… In fact, anything off of 'Rust In Peace' is a blast. The songs from 'Dystopia' have enough double-kick action to keep me on my feet. We've also been adding some tunes from 'Killing Is My Business'; they're pretty intense with that old-school thrash vibe. But I enjoy playing more straightforward stuff like 'A Tout Le Monde' or 'Trust' as well. We usually play around twenty songs and every song has its place in the set."

MEGADETH bassist David Ellefson told myROCK about Verbeuren: "Chris Adler [LAMB OF GOD] is the highest caliber of the new school of heavy metal drumming, and then Dirk is kind of almost a half generation behind him, you know, coming up with new ideas — this whole grindcore thing that he does and his skill level. So just like with [current MEGADETH guitarist] Kiko [Loureiro], there isn't a higher level of caliber of musician to have in the band than the guitar position, and it's the same with the drums. I think if anything, it's more of a feel. I know when I came back into the group in 2010, one of my first really kind of deciding factors was, 'What is it gonna be like to play 'Rust In Peace' with [former MEGADETH drummer] Shawn Drover?', having recorded it and played it with Nick Menza. And as soon as I played with Shawn and it was very easy and he had a very comfortable feel, it made the whole experience just really enjoyable. And I think when Dirk came in on this tour, fast forward years later here now, he has a real energy and a sparkle about his… just a real pizzazz in his drumming that we felt immediately. And it's ironic that it's from his left hand with the snare drum. He's got a snare drum sound like some of these iconic drummers, like Alex Van Halen or Kenny Aronoff, a couple of American drummers that had these iconic… you hear 'em on the radio and you know it's them playing. And Dirk has a real charisma to his playing that I think has really brought a whole new sound even to MEGADETH."