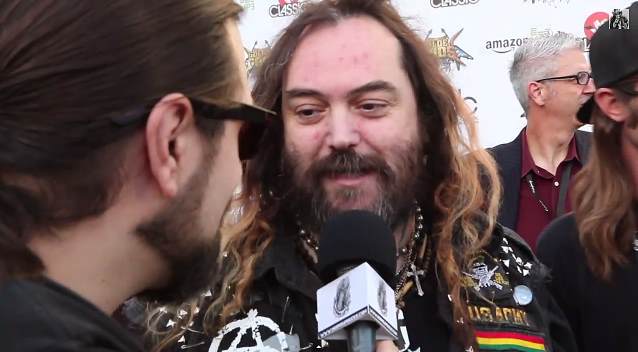 Jo Schüftan of Horns Up Rocks! conducted an interview with Max Cavalera (SOULFLY, CAVALERA CONSPIRACY, SEPULTURA), along with Max's son Igor (who plays in LODY KONG) and stepson Richie (INCITE), on the "black carpet" of this year's Revolver Golden Gods awards on April 23 at Club Nokia in Los Angeles, California. You can now watch the chat below.

Max's autobiography, "My Bloody Roots: From Sepultura To Soulfly And Beyond", was co-written by Max Cavalera and Joel McIver, author of 25 books on music. The foreword was written by Dave Grohl (FOO FIGHTERS, NIRVANA).

SOULFY's ninth album, "Savages", was released on October 1, 2013 via SOULFLY's new label home, Nuclear Blast Entertainment. The CD was produced by Terry Date, who is known for his work with such acts as PANTERA, DEFTONES and SOUNDGARDEN, among many others. Guest vocal appearances on "Savages" include SOULFLY bass player Tony Campos, CLUTCH's Neil Fallon, NAPALM DEATH's Mitch Harris, Jamie Hanks of I DECLARE WAR and SOULFLY mainman Max Cavalera's son Igor Cavalera (of LODY KONG).