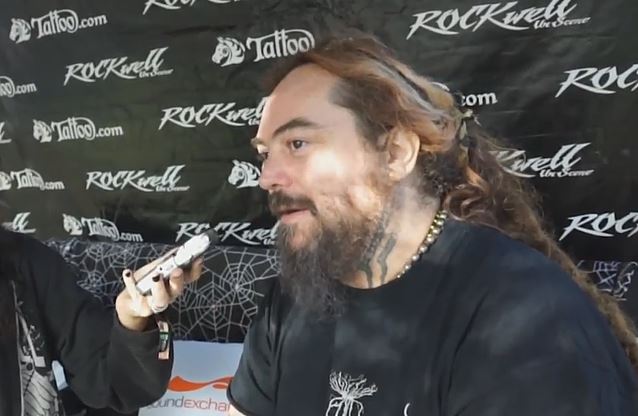 Rockwell Unscene conducted an interview with Max Cavalera (SEPULTURA, SOULFLY, CAVALERA CONSPIRACY, KILLER BE KILLED) at last month's Aftershock festival in Sacramento, California. You can now watch the chat below.

Speaking about his live performance, Max said: "When you do your show, it's a transformation. I was like possessed. My nickname in early SEPULTURA was Max Possessed, which was something that I chose. I was always into stuff like that, because my mom is a high priestess of a Brazilian religion called Candomblé, which is very spiritual. Candomblé is a bit like… It's like voodoo, but the good side, not the dark side — kind of like that. So I was always around her when they did the rituals, and I saw a lot of people getting possessed, and I always liked that."

He continued: "When my mom came to see my first shows, she mentioned that. She goes, 'It looks like one of my rituals, what you guys are doing. 'Cause you're not the same son on a stage that you are at home.' Cause at home I am all mellow and stuff, and on a stage, it's a whole another layer of madness."

Max and his brother Igor Cavalera (drums) are celebrating the twentieth anniversary of SEPULTURA's classic album "Roots" by performing the LP in its entirety on a European tour. They are being joined by their CAVALERA CONSPIRACY bandmates Marc Rizzo (guitar) and Johny Chow (bass).