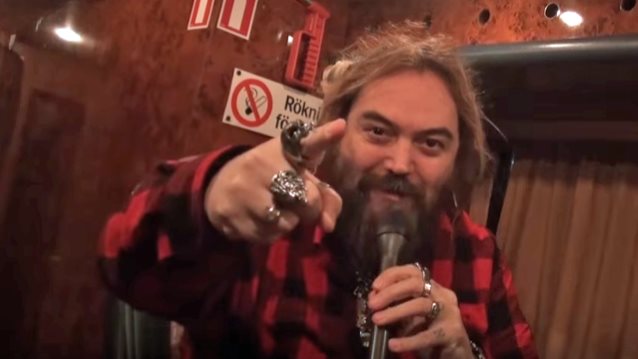 Finland's Kaaos TV conducted an interview with Max Cavalera (SOULFLY, SEPULTURA, CAVALERA CONSPIRACY) on December 9 in Hämeenlinna, Finland. You can now watch the chat below.

Asked if there is any chance of him and his brother Igor Cavalera (drums) performing any other SEPULTURA albums in their entirety after the success of the current tour celebrating the twentieth anniversary of the band's classic album "Roots", Max said: "Yeah, we're doing everything one step at a time. So we are still on the 'Roots' album [anniversary tour]. We have [another] tour in February, in fact, in America, with FULL OF HELL. I think IMMOLATION is gonna open. And we are doing some festivals in the summer also with 'Roots'. And I've got other things. SOULFLY is still very important for me. A lot of fans ask me about SOULFLY on this tour. A lot of fans are worried about SOULFLY. [They're] like, 'Are you gonna stop doing SOULFLY because of this?' It's, like, 'No, no. Don't worry about it. SOULFLY will continue.'"

He added: "Next year is the 20th anniversary of the formation [of SOULFLY], and the year after that is the 20th anniversary of the first [SOULFLY] record, which is very important. I might do something like play the first SOULFLY album for the fans again at that time; I don't know. But eventually, at some point, I think when me and Igor get together again, we can think of other records, like 'Arise' and 'Beneath The Remains', 'Chaos A.D.' — that would be fun to play like this too. Because this experience really was cool. It was really fun, it was for the fans, and we had a great time doing it, so why not?"

Regarding the next SOULFLY album, which is tentatively due at the end of 2017, Max said: "The plan [is to start writing in early 2017]. At least the riffs, the first ideas of the riffs. I'm very inspired right now, so I think it's a good time. And I promised people a mixed kind of a record. Because SOULFLY is getting heavier and heavier and heavier, but a lot of fans really wanted me to go back to maybe the early vibes of the first records, like 'Soulfly', 'Primitive' and 'Prophecy', which [are] a little bit more tribal. So I might do a record that is half tribal, so it's half like the past, and half really heavy, which is the extreme metal that I listen to — stuff like BÖLZER and FIRESPAWN and ROTTEN SOUND… stuff that I like that's heavy. So it's like a mix. It'll please both worlds. It'll please me, because it's still heavy, extreme, and it'll please the old fans, because they wanna hear some of that tribal stuff again."