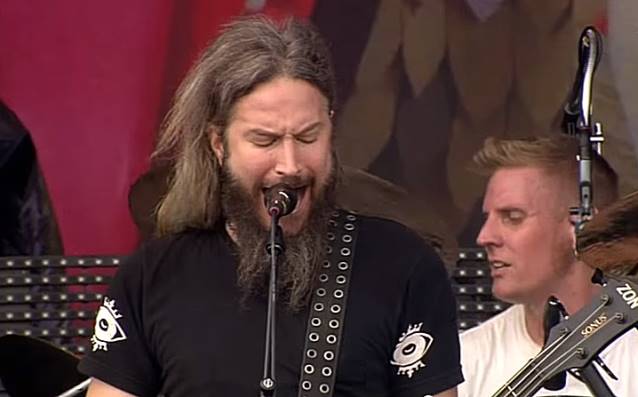 Atlanta progressive metallers MASTODON will be the musical guests on the September 15 episode of "Jimmy Kimmel Live!" The band will perform several songs on the show's outdoor stage in front of a standing-room-only crowd.

"Jimmy Kimmel Live!" airs every weeknight (11:35 p.m.-12:37 a.m., ET) and features a diverse lineup of guests that include celebrities, athletes, musical acts, comedians and human interest subjects, along with comedy bits and a house band.

MASTODON's sixth album, "Once More 'Round The Sun", sold around 34,000 copies in the United States in its first week of release to land at position No. 6 on The Billboard 200 chart. The record arrived in stores on June 24 via Reprise Records.

"Once More 'Round The Sun" was recorded in Nashville with Grammy Award-winning producer Nick Raskulinecz, who is known for his work with RUSH, DEFTONES, FOO FIGHTERS and ALICE IN CHAINS. Also available on June 24 was a stunning deluxe 2LP vinyl edition of "Once More 'Round The Sun". This limited edition includes two discs pressed onto 180-gram black vinyl housed in a quadruple gatefold vinyl jacket featuring artwork by Skinner, plus a CD of the complete album. The package includes four exclusive lithographs derived from the album artwork.