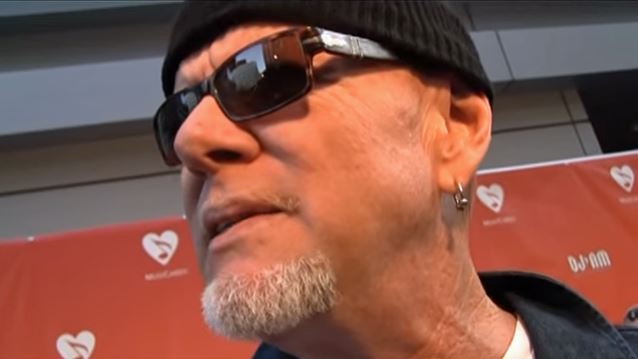 GREAT WHITE guitarist Mark Kendall says that his band has "never" used pyrotechnics and insists that the group that played the 2003 show in Rhode Island that claimed 100 lives was not really GREAT WHITE.

Kendall founded GREAT WHITE with former singer Jack Russell in 1982. At the time of the fire, the group that was on the road was called JACK RUSSELL'S GREAT WHITE. Kendall said he was asked to join Russell and his solo band on the tour to help boost attendance.

Asked by a TMZ cameraman at the Los Angeles airport if GREAT WHITE still uses pyrotechnics, Kendall — who was traveling with drummer Audie Desbrow — said (see video below): "We've actually never had pyrotechnics; it was a misconception on that. It was the singer's solo band. [Audie] wasn't there. I sat in with [Jack's] band [that night in Rhode Island] because his solo tour wasn't doing very well. So I came out, and they'd already been out three months. And I guess they were using this little sparkle thing at the beginning of the show. So I met [Jack's] band [shortly before we played the show] and everything. And then the tragedy happened or whatever. And CNN just ran out and said [in its initial report] it was GREAT WHITE [that played that night], like it was the classic lineup. [But] we've never used pyro."

Kendall went on to explain that the name GREAT WHITE was displayed on the marquee outside The Station nightclub because the owner of the venue wanted to "sell more tickets." He added: "That's why when [the victims' families] sued, they sued 'Jack Russell Touring,' not GREAT WHITE. Had it been GREAT WHITE, they would have sued us."

Kendall told Myglobalmind webzine in a 2014 interview that he didn't think the Rhode Island tragedy affected people's perception of the GREAT WHITE name. "Not for the most part for people who know what really happened," he said. "The place where the accident happened, the accident report said they had what was equal to thirteen gallons of gasoline on their walls with this foam. They even allowed smoking of cigarettes in the building, so it was an accident waiting to happen. It just so happened that it happened on the night that we were there. But people who have read the books that they put out since, I really don't think that too many people blamed the band because they [the Station nightclub] had had pyro there several times before us. Just a couple of weeks prior to when we played there they had a KISS tribute band where the bass player was breathing fire like Gene Simmons. They were just lucky that nothing had happened then."

Guitarist Ty Longley, who played for Jack Russell's GREAT WHITE, was one of the people who perished in The Station blaze, which became the fourth deadliest fire in U.S. history.

The fire at The Station nightclub in West Warwick began in an overcrowded club when pyrotechnics from Jack Russell's GREAT WHITE ignited illegal soundproofing foam lining the club's walls.