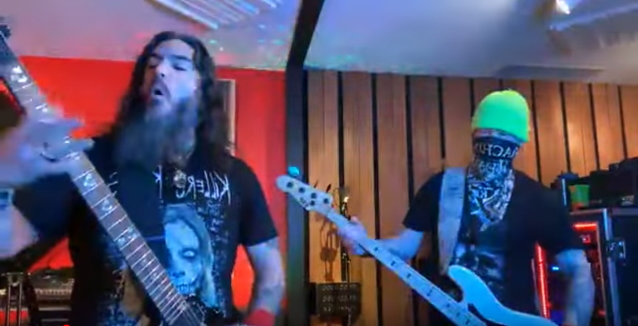 MACHINE HEAD's Robb Flynn and Jared MacEachern held the first "Electric Happy Hour" of 2021 on Friday, January 15 during which they performed around a dozen and a half songs, including MH tunes "Ghosts Will Haunt My Bones", "Struck A Nerve" and "Blood For Blood", plus covers of IRON MAIDEN's "Hallowed Be Thy Name", METALLICA's "Master Of Puppets" and SYSTEM OF A DOWN's "Aerials". You can now watch the session below.

Amid the coronavirus pandemic, Flynn has been staging "Acoustic Happy Hour" solo sessions every Friday, during which he has performed a number of MH tunes as well as covers of other artists' songs.

Flynn told Kerrang! magazine about "Acoustic Happy Hour": "It's just basically a free show on Facebook. I try to learn two new songs every Friday. I take requests, and I try to play MACHINE HEAD songs that have never been played live acoustic. Last week I covered MUSE, TOOL and LYNYRD SKYNYRD. It's been fucking awesome. The first three or four were horrible — I knew they were — but I knew that if I kept sucking for six weeks I would get past it.

"For the first 20 years of my career, I never took singing lessons," he continued. "Then I did some about 10 years ago. With these acoustic shows, I've been back in contact with my old singing teacher to try and figure out why I can do a three-and-a-half hour MACHINE HEAD show, but this clean singing is kicking my ass. It's been an opportunity to un-learn all the wrong shit and get an opportunity to do things right."

In November, MACHINE HEAD released a new single, "My Hands Are Empty", via Nuclear Blast. The song marked the first musical collaboration between Flynn and original "Burn My Eyes" guitarist Logan Mader in 24 years.

"My Hands Are Empty" was the latest in a line of singles to be released by MACHINE HEAD, which issued "Do Or Die" in October 2019, "Circle The Drain" in February, and the two-song digital single "Civil Unrest", consisting of "Stop The Bleeding" and "Bulletproof", in June. "Stop The Bleeding" featured guest vocals from KILLSWITCH ENGAGE frontman Jesse Leach, and was written and recorded just days after the murders of George Floyd and Ahmaud Arbery.

In July, MACHINE HEAD canceled its previously announced rescheduled 2020 tour dates for Europe and Australia due to the coronavirus pandemic which is sweeping the globe.