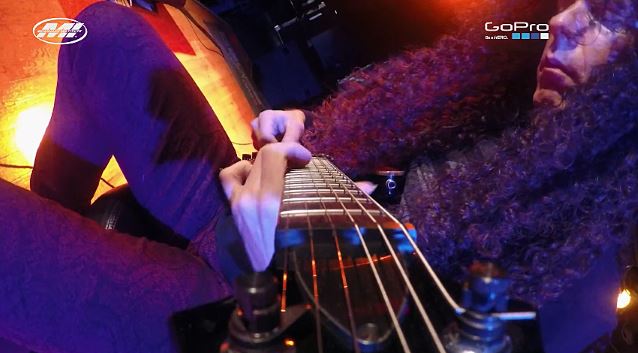 A GoPro camera was mounted on Marty Friedman (ex-MEGADETH) guitar neck, looking down the fretboard and providing a live video feed of his playing, during his special guitar clinic at Los Angeles' famous music college Musicians Institute exclusively for students and alumni. The clinic took place at MI's Concert Hall on January 27 from 2:00 p.m. to 4:00 p.m. Check out the resulting video footage below.

Marty's latest solo album, "Inferno", sold around 2,100 copies in the United States in its first week of release to debut at position No. 186 on The Billboard 200 chart. The CD was released on May 26, 2014 via Prosthetic Records (except in Japan, where the album was made available through Universal Music). The CD was the 52-year-old musician's first collection of material recorded for the U.S. market since 2003's "Music For Speeding". Among the guest collaborators that appear on the effort are CHILDREN OF BODOM's Alexi Laiho, REVOCATION's Dave Davidson, acoustic flamenco-metal hybridists RODRIGO Y GABRIELA and Friedman's pre-MEGADETH bandmate in CACOPHONY, Jason Becker.

Speaking to Guitar World magazine, Friedman said: Each of the guests on this record took a song from scratch — they would write it and then I would arrange it and add my parts to it. That way we were both invested in it and it's a little bit of a deeper experience."