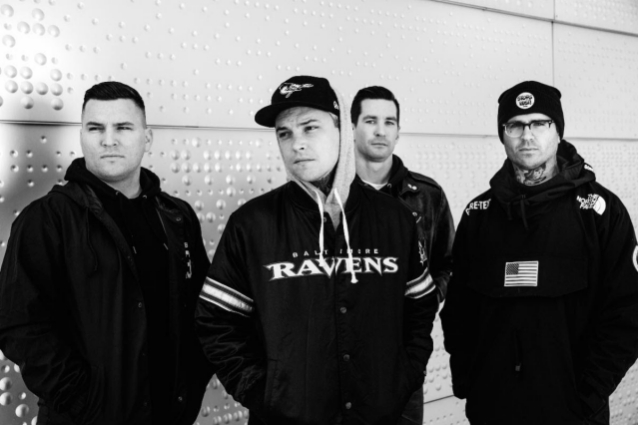 Australian metalcore juggernauts THE AMITY AFFLICTION have returned with a new label and a new single as well. The band has announced their signing to Pure Noise Records with "All My Friends Are Dead", a blistering track that serves as the follow-up to 2018's "Misery".

"We are excited as all hell to be on Pure Noise, where the roster is amazing, and Jake is still running the label independently, and with a strong ethos," shares vocalist and lyricist Joel Birch."We can't wait to see what the future holds; this shit is tight, thank you for your support, thank you Pure Noise, and thanks again to everyone out there who makes this dream of playing music worldwide our reality."

Fans can hear "All My Friends Are Dead" live this fall as THE AMITY AFFLICTION prepares to hit the road in Australia, Japan, and the United States. They will also be touring the U.K. in early 2020.

Last year THE AMITY AFFLICTION released "Misery", the band's sixth studio album. In it they wove electronic elements and even bolder hooks into their signature sound, and did so with humbling confidence. "It was time for a breath of fresh air, and more so for us than anyone else," stated Birch. "Our whole career, we've always felt that we've had to prove ourselves. We've had to prove we tour enough, that we're good enough, and we've never been given a handout. We've never really been supported by other bands taking us on big tours to help us get bigger. With this record we're standing here and stating here we are."

Throughout the album, while they pushed their sound in previously unexplored directions and imbued every track with a distinct identity, everything they did remained fundamentally true to who they are, both as individuals and as a unit. "It was definitely somewhere that we were headed. Everyone's a bit older and musical influences change, and how we envision the band changed," explains Birch. "We always handle everything ourselves, and our producer Matt Squire helped us get the electronic stuff the way we wanted it. We came to him with clear ideas and placeholders of the sounds we wanted, and he helped us nail those down."

While they retained the formula of guitarist Dan Brown writing all of the music, Birch providing lyrics, and bassist/clean vocalist Ahren Stringer weaving the two together implemented on "This Could Be Heartbreak" (2016), the band worked more cohesively than on any of their previous releases. They also recruited DEFEATER drummer Joe Longobardi and producer Matt Squire to round out the team.