San Francisco's LIGHT THIS CITY is regrouping for four farewell shows in April. The band has been dormant since mid-2008, before the release of its final record, the critically acclaimed "Stormchaser".

Drummer Ben Murray commented; "It has been just about two years since LIGHT THIS CITY came home from the DEATH ANGEL tour and decided to call it quits.

"Needless to say, it has been an exciting and interesting two years since we put a stop to the band, and since June of 2008 everyone in LIGHT THIS CITY has started brand new awesome musical endeavors. That being said, we always knew we would get together one last time to thrash with all our amazing fans up and down California. That time has come, and we are extremely excited to announce four 'final' LIGHT THIS CITY shows. These should all be absolutely killer, and we expect all our west coast fans to be there! We will play a good amount of 'Stormchaser' songs as well as all the bangers from 'Facing the Thousand' and 'Remains of the Gods'.

"Since we didn't play any shows in support of 'Stormchaser', this will be the best chance for all of you metalheads in California to come rage with us while we bust out these songs!"

Prosthetic Records recently reissued the band's first record, 2004's self-released "The Hero Cycle". You can order it, as well as the rest of the band's catalog and other merch, here at the Prosthetic webshop. 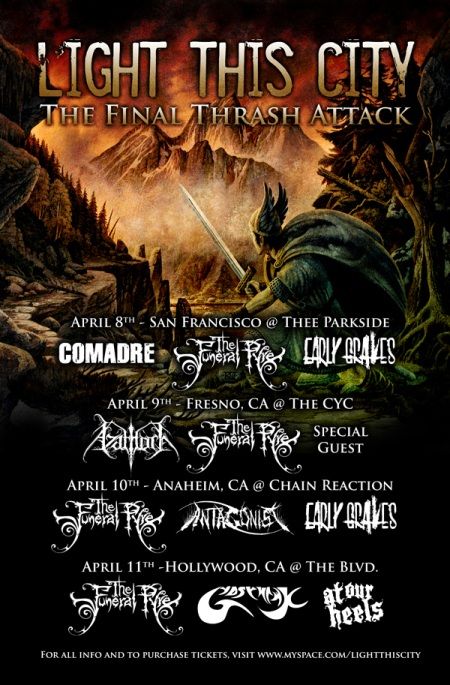