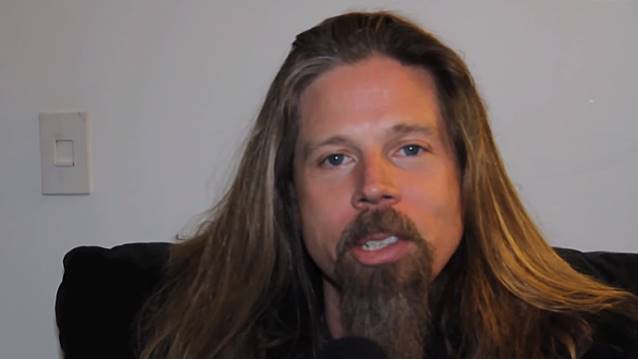 LAMB OF GOD recently entered into a worldwide distribution deal with Specticast (LED ZEPPELIN's "Celebration Day", Paul McCartney's "Rock Show") for its Don Argott-directed ("Last Days Here", "Art Of The Steal", "School Of Rock") feature film "As The Palaces Burn". Filming for the movie began in 2012 and concluded in March of 2013.

"As The Palaces Burn", which should not be confused with the making-of documentary packaged with the recent re-release of the 2003 LAMB OF GOD album of the same name, was conceived to be a documentary focused on the power of music and its impact on cultures around the world and its ability to bring together people of all nationalities regardless of religious or political differences. After a worldwide casting call, filming took place in Colombia, Venezuela, Israel, India, and the United States. As filming reached its conclusion, the documentary was forced to take a major turn when the band's lead singer, Randy Blythe, was arrested in the Czech Republic and charged with the murder of a fan in June 2012. Granted unique access to Blythe's saga, Argott's filming covered Blythe's 38-day imprisonment in Prague, his release and the band's return to live performances, and finally Blythe's trial for murder in Prague in February 2013.

Asked about a timeline for LAMB OF GOD's next studio album, Adler replied: "I know Randy said something a couple weeks ago where he wants to take a lot of time away from the band and just kind of work on his thing and get his head straight. I can't blame him at all, and I think we all need to some time off. But, last November, at the end of our tour, we all spoke for a little while about a time table. And we don't really need Randy to be there while we're writing music. Normally, he comes in with the lyrics last, sometimes even in the studio. So, we can a great head start while he does his own thing. We talked about getting together around June-ish. Now, as time has gone on, since that tour, just over the past couple of months, I think the situation remains sort of fluid and continues to affect us in different ways. Not because of [Randy's] exoneration or how things have gone, but, really, because of the death of a fan, which is, really, the one thing that we want people to understand, that the movie is dedicated to Daniel [Nosek, the fan who lost his life at a LAMB OF GOD show in the Czech Republic]. It's about how this tragedy happened and how this person certainly didn't do anything wrong. It's very difficult to process that information as an entertainer, when we want our fans to have fun and now we know this event where this kid came to have fun is the last thing he ever saw. It's really very tough. So I think we're all, emotionally, going to deal with that in different ways. But I can see how it's draining everyone a little bit even as we continue on. So, it may be that we need a little more time just to process that emotionally. As far as music goes, I don't think anybody's thinking that we're not going to get together. In fact, at the premiere in Philadelphia, my brother, Willie [guitar], and I were talking about getting together and jamming already. So I think we're ready musically. I don't know if we're ready mentally to get in and kind of put it back together."