KORN, ROB ZOMBIE, MEGADETH, SLAYER, and TESTAMENT are among the confirmed bands for the Heavy MTL 2010 festival, set to take place on July 24-25, 2010 at Parc Jean-Drapeau in Montreal, Quebec, Canada.

Despite the unfortunate circumstances which forced the Canadian Carnage tour to be postponed, Heavy MTL is thrilled to announce that MEGADETH, SLAYER, and TESTAMENT will join the festival lineup on Saturday, July 24. Canadian Carnage ticket holders are encouraged to retain their tickets as further information will be made available shortly.

On Sunday, July 25, fans will get an earful courtesy of none other than

The aforementioned acts are traveling throughout the U.S. as part of the Rockstar Energy Drink Mayhem Festival and they will cross the border exclusively to join forces with Heavy MTL, creating a unique event in North America.

The best part? Heavy MTL is not done yet! Full lineup and ticketing information for Canada's biggest metal and hard rock festival will be announced soon. 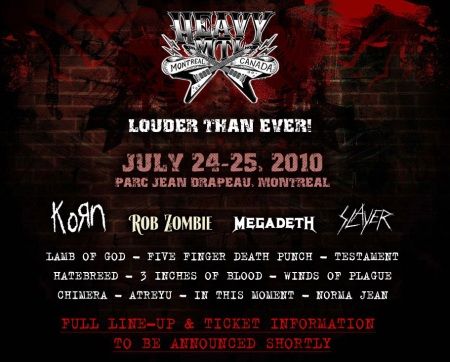