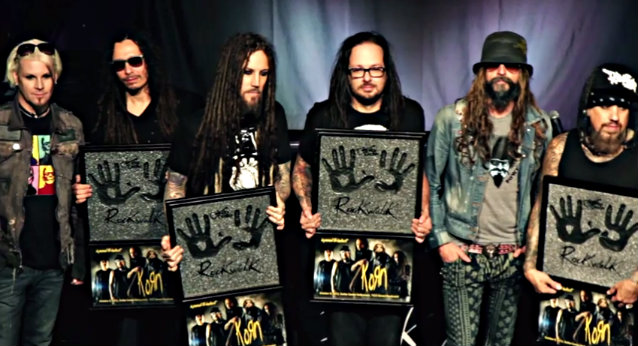 As part of the events surrounding the release of the band's 11th studio album, "The Paradigm Shift", KORN was inducted into the Guitar Center RockWalk in Hollywood, California on October 8, the same day the new CD arrived in stores. KORN was inducted by Rob Zombie, who said, "About 20 years ago I remember flipping on MTV and seeing this band called KORN. 20 years later they're still constantly reinventing themselves, reinventing the wheel . . . There's not a lot of spectacular bands who have survived the past twenty years. KORN is definitely one of them."

The official Guitar Center video recap of the ceremony can be seen below.

The Pulse Of Radio asked guitarist Brian "Head" Welch, who rejoined KORN earlier in 2013 after an eight-year absence, what made this band work so well. "I believe in destiny and I believe in, like, things that are meant to be before they even happen, so I think that's a big part of it," he said. "But more than that even, it's just like, we just grew up together and we had a passion for music and when you grow up with someone, you know, you just, you know 'em like the back of your hand, you know. And it just helped with KORN."

Welch said at the induction ceremony, "We're just so thankful. This is just surreal. To grow up with your friends and be able to do this . . . it's more than a dream come true."

Guitarist James "Munky" Shaffer said, "It's an honor to be in the category with so many great musicians and people who work hard in this industry."

Singer Jonathan Davis added, "When you look at the names of the other people inducted here all you can say is 'wow!' What an honor!"

KORN and ROB ZOMBIE co-headlined the "Night Of The Living Dreads" tour earlier this fall. The 17-date run began on November 3 in Reno, Nevada and wrapped on November 26 in Bethlehem, Pennsylvania.