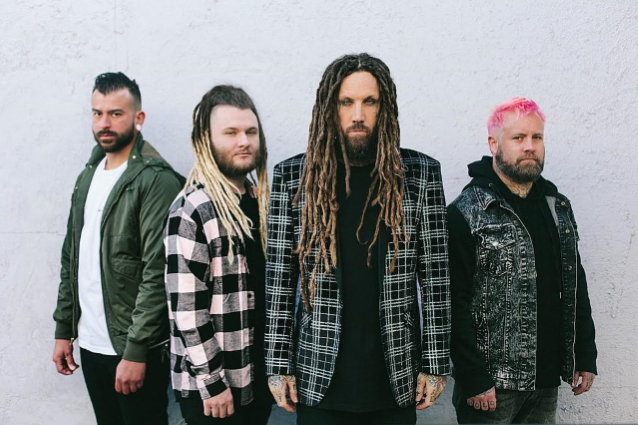 Welch commented: "'Let Me Love You' has been one of my favorite tracks to cover. It's so enjoyable to me making a pop song super heavy! Having three vocalists perform on the track was unique as well and I love the way mine, Lacey and JR's voices blend together.

"When I asked Lacey to do the song with us, I had no idea what the lyrics would mean to her at that particular time. After discovering what she was going through, my main hope with the song was that Lacey would find healing, and that healing might extend to anyone struggling in life who heard the track. The 'never give up' message that directors Sebastien Paquet and Alison Roberto worked hard to convey in the music video profoundly mirrored some of the conversations Lacey and I were having behind the scenes, without either director having prior knowledge of the conversations, so we were very blown away by that and we're so proud of what we achieved here with this song and video. Art is so much more powerful than we think."

Sturm adds: "Working with LOVE AND DEATH on 'Let Me Love You' was sort of a supernatural experience. I was mourning the loss of a loved one when I recorded the song. Mourning is a multifaceted process and sort of comes in waves. They asked me to do the song at a very dark moment in that process. When I went to sing in the studio, the lyrics were everything I wanted to sing and scream in response to this death; which felt like such a theft.

"Sometimes death is beautiful and sometimes it is a thief. I know people who have died from overdose, alcoholism, suicide — yes — but I also know so many people who have overcome these things and are making that story their own ripple effect of hope and life. Brian and I both have lived stories like that, overcoming suicide and addiction. For Bieber to sing 'Let Me Love You' is inspiring in one way maybe, but for Brian to scream it and to get to scream it alongside him over so many people who are struggling — it's like I got to believe for people to overcome right in the face of the hopelessness I was tempted to embrace. The same thing happened when I did the video. I needed it. Right at that moment. It was like the author of life loved me while death was trying to suffocate me. I got to let God love me through this sacred echo of a song. I'm so thankful."

"Let Me Love You" is taken LOVE AND DEATH's latest album, "Perfectly Preserved", which arrived in February via Earache Records.

"Perfectly Preserved" is described in a press release as "a blistering but accessible full-length follow-up, driven by the spiritual resilience inherent in the first record, combined with an even starker depiction of real-life struggle." Anger, broken relationships, lowered self-worth, and the collision of optimistic values with oppressive systems are all on display, from the arresting refrains of "Tragedy", "Death Of Us" and "Affliction" to the bold, conqueror driven anthem of "White Flag".

The band began with similar raw, authentic emotional honesty to what drove Welch to multiplatinum and Grammy Award-winning heights as a co-founder of genre trailblazers KORN. Forged as an outlet for recovery and redemption in a season of change, the creation of LOVE AND DEATH resulted in the powerful and dynamic 2013 debut "Between Here & Lost". The album spoke plainly to the hearts of similarly disenfranchised fans all across the world.

"Perfectly Preserved" marks the introduction of guitarist, bassist and co-songwriter Jasen Rauch as a full-fledged member of the band, as well as second time producer for LOVE AND DEATH (co-produced by Joe Rickard). Jasen, best known as an integral part of chart-topping rockers BREAKING BENJAMIN, produced LOVE AND DEATH's first album in 2013. The duo first met a year or two after the release of Head's solo album, "Save Me From Myself" (2008). As Head experimented with synthesizers, it was Rauch who encouraged him to pick up his guitar and churn out new riffs.

LOVE AND DEATH charge into this new chapter with a definitive lineup, which sees Head and Jasen side by side with the band's original guitarist, JR Bareis, also on vocals and guitar, and powerhouse drummer Isaiah Perez. It was a perfect storm of friendship and creativity, as they all worked on the album in Nashville, Los Angeles, and Chicago, over several years.